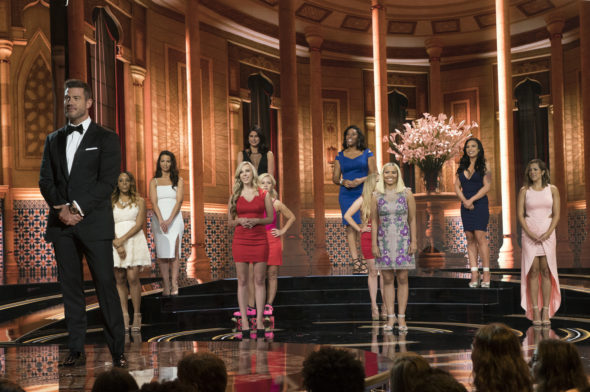 Has ABC gotten down on bended knee to keep Jesse Palmer? Is The Proposal TV show cancelled or renewed for a second season on ABC? The television vulture is watching all the latest cancellation and renewal news, so this page is the place to track the status of The Proposal, season two. Bookmark it, or subscribe for the latest updates. Remember, the television vulture is watching your shows. Are you?

An ABC dating reality TV series, The Proposal is hosted by Jesse Palmer, with Ellen K announcing. In each episode, matchmakers select contestants, who then progress through “pageant-style” elimination rounds. When only two remain, the mystery suitor is revealed, in order to make a romantic proposal.

The first season of The Proposal averaged a 0.64 rating in the 18-49 demographic and 3.04 million viewers. Find out how The Proposal stacks up against other ABC TV shows.

Will ABC cancel or renew The Proposal for season two? The ratings aren’t great but I think they are good enough to earn this show another summer run. I’ll update this page with breaking developments. Subscribe for free alerts on The Proposal cancellation or renewal news.

*8/13/19 update: ABC has cancelled The Proposal TV show so there won’t be a second season.

What do you think? Were you hoping that The Proposal TV show would be renewed for season two? Are you sorry that ABC cancelled this TV series, instead?

I loved that show THE PROPOSAL… bring it back .. there’s no other dating shows except The Bachelor/ Bachelorette… the best part of The Proposal is that it wasn’t just for 20’s and 30’s age group. We need a mature people dating show .

I want to be on the show soooooo bring it back and give me a chance!

Bring the Propoal back. It was a great reality show. Give it a chance!!

Please I need to watch the proposal show . Please come back!!!! I love that show!! Missing you

Please bring it back. It was a fun show to watch and fast paced.

I so look forward watching this program
I have looked ahead like for September 2018 , I don’t see it on Monday
Please do not cancel , I love this show
It reminds me of the dating game or the shows that are close to it
Its fun , funny and I love guessing
So please , please bring it back

I enjoy The Proposal. I find it interesting and hope a follow-up show on how successful the couples are will be done. Please renew it. Thanks.

I think it’s a fun show to watch, I would for sure watch it

It’s ok either way. I just don’t see how you can get engaged in a hour. My husband and I moved in together after our first date and we have been married for almost 31 years.

They have got to be kidding with this one.