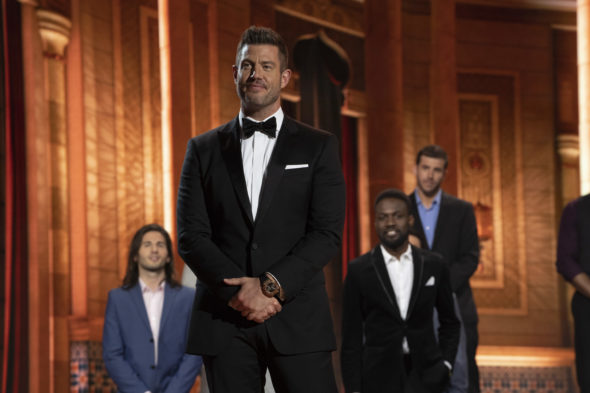 TV show description:
From Mike Fleiss, creator of The Bachelor franchise, The Proposal TV show is a new dating reality TV series. Former NFL quarterback Jesse Palmer hosts the hour, during which matchmakers will select a panel of eligible men or women, to compete for the heart of a mystery suitor.

The episodes play out across four pageant-style rounds: first impressions; beachwear; questions and answers; and family member vetting. Participants are eliminated after each round. Once there are only two contestants remaining, the mystery suitor is revealed, in order to make a romantic proposal.

Series Finale:
Episode #10
Nine eligible gentlemen selected by a blue-ribbon panel of matchmakers vie for the heart of a mystery woman looking for a man that is the perfect mix of Mr. Rogers and Christian Grey. Over the course of the evening, only two lucky gentlemen have the opportunity to make a proposal of a lifetime, when the mystery woman’s love story begins.
First aired: August 27, 2018.

What do you think? Do you like The Proposal TV series? Should this ABC reality TV show have been cancelled or renewed for a second season?

Please keep it going I love it.

I Love the show and would want it continued

I love the show! Please keep it going!!❤️❤️❤️