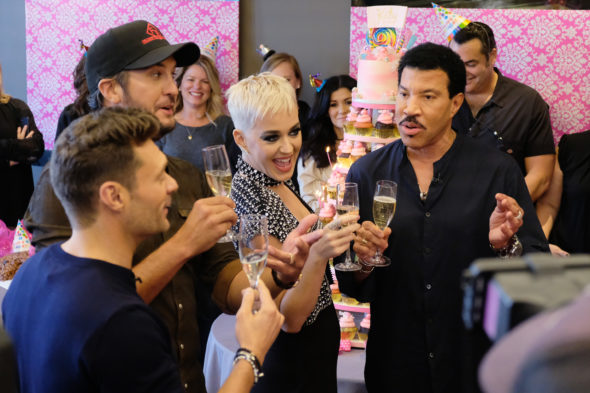 This might put a song in your heart. Although it’s not yet up on the press site, the American Idol TV show revival will air on ABC on Sundays from 8:00pm to 10:00pm ET. The new series will premiere on March 11, 2018. Host Ryan Seacrest announced the American Idol release date this morning on LIVE with Kelly and Ryan.

Auditions for the American Idol reboot kicked off in August. Luke Bryan, Katy Perry, and Lionel Richie will serve as the new judging panel for the competitive singing reality TV series on ABC.

For its first 15 seasons on the air, the US version of American Idol ran on FOX. FremantleMedia North America and 19 Entertainment produce the reality competition. Executive producers include Trish Kinane and Jennifer Mullin, with Megan Wolflick serving as co-executive producer. FremantleMedia International will distribute the series outside of the US.

I am curious to see how it goes. I like the Voice, and I think AI might fail if they don’t step up their game from the last season. I don’t respect Katy Perry anymore (I used to love her music and performances) but that’s beside the point. That might be a drawing factor for AI, but not me. I love the two other judges! Hopefully they will all (especially Katy) keep their political views silent on the show. Politics has no place in the entertainment world IMO. If they start that, I won’t watch it. I may (or may… Read more »

I agree with Dave. The X Factor should come back next year on Fox.

OK, I agree with myself and no one else does. Happy? I just don’t get why I get the thumbs down.

I agree with you The X Factor was much better. American Idol hasn’t been good since Simon left

Good to hear! A missing link to your article, who is the fourth judge?

“Auditions for the American Idol reboot are slated to kick off in August.” Umm… it’s November…

That’s great! Now, let’s have The X Factor USA back next year, as well.