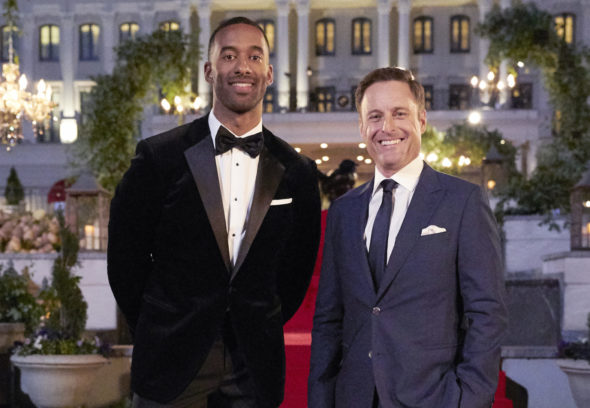 Will the season end with a proposal? Has The Bachelor TV show been cancelled or renewed for a 26th season on ABC? The television vulture is watching all the latest cancellation and renewal news, so this page is the place to track the status of The Bachelor, season 26. Bookmark it, or subscribe for the latest updates. Remember, the television vulture is watching your shows. Are you?

Airing on the ABC television network, The Bachelor TV show is hosted by Chris Harrison. Season 25 follows Matt James as he meets, courts, and weeds out 32 potential “soul mates” in his quest for “true love.” A 28-year-old real estate broker, entrepreneur, and community organization founder from Raleigh, North Carolina, James was cast in the 16th season of The Bachelorette. When production on that season was delayed, he was chosen to be the first Black male lead for the anniversary season of The Bachelor. Due to the pandemic, much of the season has been filmed at a luxury resort in Farmington, Pennsylvania.

The 25th season of The Bachelor averaged a 1.35 rating in the 18-49 demographic and 5.30 million viewers. Compared to season 24, that’s down by 26% in the demo and down by 17% in viewership. Find out how The Bachelor stacks up against other ABC TV shows.

Will ABC cancel or renew The Bachelor for season 26? Though the ratings have inched downward over the years (as all shows’ have), The Bachelor has remained ABC’s highest-rated unscripted show. The series also provides contestants for other “Bachelor Nation” series (like The Bachelorette and Bachelor in Paradise) that air throughout the year. I have no doubt that The Bachelor will be renewed. I’ll update this page with breaking developments. Subscribe for free alerts on The Bachelor cancellation or renewal news.

What do you think? Are you glad that The Bachelor TV show has been renewed for a 26th season? How would you feel if ABC had cancelled this TV series, instead?

Cancel it! It’s a looser show.

Either bring back Chris Harrison or cancel the show.

They need to bring back Chris Harrison. He is the father of the Bachelor nation.

The bachelor reality show no longer represents a journey of falling in love with the prospect of a proposal at the end. Now it portrays political drama and scandals and who is or who is not being politically correct. Social media and podcasts are becoming instrumental in investigating, reporting, and becoming judge and jury to justify the need to police political correctness (might as well have a talk show). I believe that ABC has drifted away from the initial concept of the bachelor. Now is the time for ABC to divorce itself from the show and cancel.

I think it’s a stupid show along with the Bachelorette. Cancel the shows and put on something good.

Let me see if I can explain this…every show is the same thing..high school children crying, fighting, and whoever is the star always leads on 2,3, 4 people, then more crying and 9 times out of 10, it doesn’t work!!!!
When I want a laugh I watch it !

Please cancel this mess. The Bachelor/Bachelorette franchise has run its course.

I would be very disappointed if this show was cancelled.

I’d never know if it was cancelled…. WE NEVER WATCH THIS IDIOTIC SHOW.

Neither do I and never will