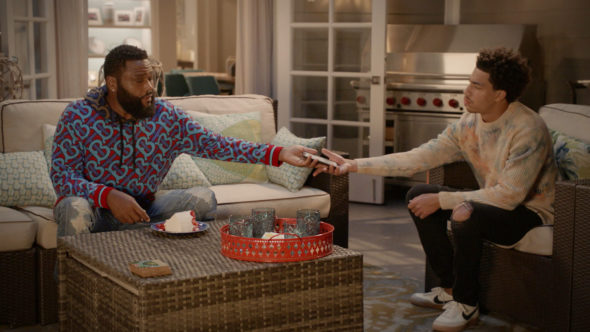 Can Dre and Bow continue to keep on top of their growing kids? Has the Black-ish TV show been cancelled or renewed for an eighth season on ABC? The television vulture is watching all the latest cancellation and renewal news, so this page is the place to track the status of Black-ish, season eight. Bookmark it, or subscribe for the latest updates. Remember, the television vulture is watching your shows. Are you?

Airing on the ABC television network, Black-ish stars Anthony Anderson, Tracee Ellis Ross, Yara Shahidi, Marcus Scribner, Miles Brown, Marsai Martin, Laurence Fishburne, Jenifer Lewis, Peter Mackenzie, Deon Cole, and Jeff Meacham. Wealthy ad executive Dre Johnson (Anderson) and his wife, anesthesiologist Rainbow (Ross), want to give their children the best of life, as well as a strong foundation for a bright future. They’re determined that those will include a strong sense of cultural identity and respect for their past. That’s not always easy in a rapidly changing world. In the seventh season, the sitcom continues to look at current events through the lens of the Johnson family, addressing the global pandemic, systemic racism, and the movement for social justice and equality.

The seventh season of Black-ish averaged a 0.48 rating in the 18-49 demographic and 2.35 million viewers. Compared to season six, that’s down by 19% in the demo and down by 11% in viewership. Find out how Black-ish stacks up against other ABC TV shows.

Will ABC cancel or renew Black-ish for season eight? Though the ratings have dropped, ABC/Disney continues to look at new ways to extend this series’ universe. We already have two spin-offs — Mixed-ish and Grown-ish — and more may be on the way. While all shows must end at some point, I think Black-ish will see an eighth season, providing the stars want to continue making it. That may be the end, however. I’ll update this page with breaking developments. Subscribe for free alerts on Black-ish cancellation or renewal news.

5/14/21 update: Black-ish has been renewed for an eighth and final season on ABC.

What do you think? Are you glad the Black-ish TV show has been renewed for an eighth season? How would you feel if ABC cancelled this TV series, instead?

Can everyone remember why we are being and why we can keep blackish on . The world need too see that black family of mixed multicultural backgrounds are excepted and are comfortable about everyone . Other programs stay on for over 15 years . Blackish opens all the questions that even children have questions too . Americans never think about the next generations that need possibly and positive open thoughts and feelings about life . I’m not asking u all too keep this program on ABC . My father GOD will always listen to prayers and those at ABC know… Read more »

I pray and hope that the show will be the renewal for the 8th season.

The show was not really representative of American-African families. It was filled with the standard events that could be seen in the old Cosby Show. It never ventured into the real situations of what American-Africans must deal with in America. The show digressed into tripe with a main character looking like a member of the Taliban. The show casing of “Colored” people simply to showcase colored people was a waste of time and TV Airspace. YES, we do need American-African shows on TV, but we need them to have substance and meaning, which is what being an American-African is all… Read more »