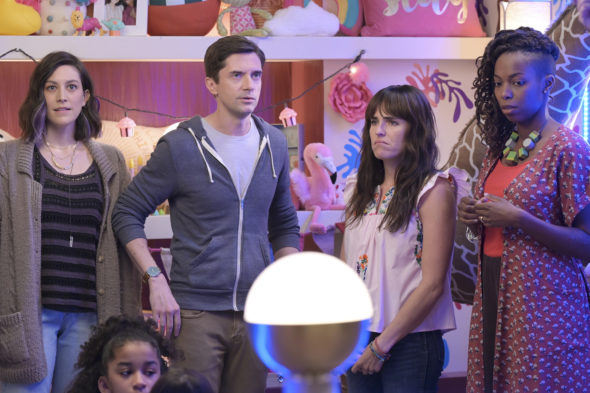 Will money issues divide these siblings? Has the Home Economics TV show been cancelled or renewed for a second season on ABC? The television vulture is watching all the latest cancellation and renewal news, so this page is the place to track the status of Home Economics, season two. Bookmark it, or subscribe for the latest updates. Remember, the television vulture is watching your shows. Are you?

Airing on the ABC television network, the Home Economics TV show stars Topher Grace, Caitlin McGee, Jimmy Tatro, Karla Souza, Sasheer Zamata, Shiloh Bearman, Jordyn Curet, Chloe Jo Rountree, and JeCobi Swain. The show takes a look at the heartwarming yet super-uncomfortable and sometimes frustrating relationship among three adult siblings of the Hayworth family. Connor (Tatro) is the youngest and most successful sibling of the family. He runs his own private equity firm and his marriage is falling apart. He has a daughter named Gretchen (Bearman). Tom (Grace) is the middle sibling and is a middle-class author who is struggling. He is married to Marina (Souza), a former attorney, and they have three kids. Sarah (McGee) is the eldest sibling and an out-of-work child therapist who’s barely making ends meet. She is married to Denise (Zamata), a teacher, and they have two kids and live in a cramped Bay Area loft.

The first season of Home Economics averages a 0.46 rating in the 18-49 demographic and 2.56 million viewers. Find out how Home Economics stacks up against other ABC TV shows.

Will ABC cancel or renew Home Economics for season two? The network could use some new comedies and this one seems like it could fill the bill. The ratings could be better but, I think it’s got a good chance of being renewed. I’ll update this page with breaking developments. Subscribe for free alerts on Home Economics cancellation or renewal news.

5/14/21 update: Home Economics has been renewed for a second season on ABC.

What do you think? Are you glad that the Home Economics TV show has been renewed for a second season? How would you feel if ABC had cancelled this TV series, instead?

I saw this show. I liked it.