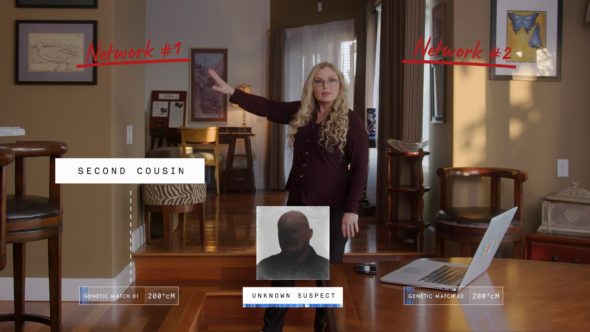 Who among us is related to a killer? Has The Genetic Detective TV show been cancelled or renewed for a second season on ABC? The television vulture is watching all the latest cancellation and renewal news, so this page is the place to track the status of The Genetic Detective, season two. Bookmark it, or subscribe for the latest updates. Remember, the television vulture is watching your shows. Are you?

Airing on the ABC television network, The Genetic Detective follows investigative genetic genealogist CeCe Moore and her work with DNA technology company Parabon NanoLabs. In the series, Moore and her team revolutionize crime-solving by working with police departments and accessible crime scene DNA to help trace the path of a criminal suspect’s family tree, uncover their identity and bring them to justice. Since 2018, Moore has used her unique research skills to transform the face of crime-solving, helping to identify more than 100 violent criminal suspects.

Will ABC cancel or renew The Genetic Detective for season two? The ratings are quite low. However, based on Moore’s following and the fact that this ABC News series is relatively inexpensive to produce, I suspect that this program may still be renewed. I’ll update this page with breaking developments. Subscribe for free alerts on The Genetic Detective cancellation or renewal news.

What do you think? Do you hope The Genetic Detective TV show will be renewed for a second season? How would you feel if ABC cancelled this TV series, instead?

This is my husband and my favorite TV program because of the science involved in catching criminals. Please bring it back!

The Best Show on tv, please bring renew it!!!

I love the show and can’t wait for the new season!

Please DO NOT CANCEL this program. I love it !

Fascnating program, I miss it.