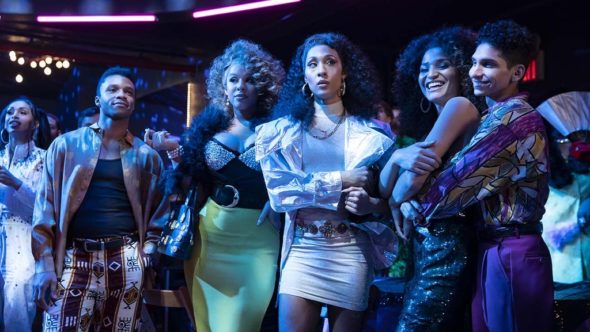 Is the party over? Has the Pose TV show been cancelled or renewed for a fourth season on FX? The television vulture is watching all the latest cancellation and renewal news, so this page is the place to track the status of Pose, season four. Bookmark it, or subscribe for the latest updates. Remember, the television vulture is watching your shows. Are you?

Airing on the FX cable channel, the Pose TV series stars Mj Rodriguez, Dominique Jackson, Indya Moore, Hailie Sahar, Billy Porter, Dyllón Burnside, Angel Bismark Curiel, Sandra Bernhard, and Jason A. Rodriguez. The story spotlights the legendary and ferocious house mothers of New York’s underground ball culture, a movement that first gained notice in the late 1980s. The third season picks up in 1994. Ballroom feels like a distant memory for Blanca (Rodriguez) who struggles to balance being a mother with being a present partner to her new love, and her latest role as a nurse’s aide. Meanwhile, as AIDS becomes the leading cause of death for Americans ages 25 to 44, Pray Tell (Porter) contends with unexpected health burdens. Elsewhere, the emergence of a vicious new upstart house forces the House of Evangelista members to contend with their legacy.

The third season of Pose averaged a 0.13 rating in the 18-49 demographic and 4.34 million viewers. Compared to season two, that’s down by 32% in the demo and down by 20% in viewership. Find out how Pose stacks up against other FX TV shows.

We don’t have to wonder if FX will cancel or renew Pose this time around. It’s already been announced that season three is the end. Could the characters return someday? I’ll update this page with breaking developments. Subscribe for free alerts on Pose cancellation or renewal news.

What do you think? Do you wish that the Pose TV show had been renewed for a fourth season on FX? Would you watch a revival?

Pose must be re newed. What a specular group of actors, scripts and music. This last episode has still crying. Fantastic last show. I will miss all of you.