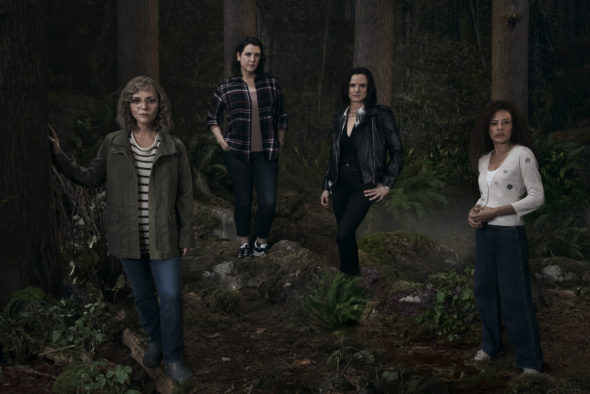 Will we get answers in the first season of the Yellowjackets TV show on Showtime? As we all know, the Nielsen ratings typically play a big role in determining whether a TV show like Yellowjackets is cancelled or renewed for season two. Unfortunately, most of us do not live in Nielsen households. Because many viewers feel frustrated when their viewing habits and opinions aren’t considered, we invite you to rate all of the first season episodes of Yellowjackets here.  *Status Update Below.

A Showtime horror and coming-of-age drama series, the Yellowjackets TV show stars Melanie Lynskey, Juliette Lewis, Christina Ricci, Tawny Cypress, Ella Purnell, Sammi Hanratty, Sophie Thatcher, Sophie Nélisse, Steven Krueger, and Jasmin Savoy Brown. The story begins with a team of wildly talented high-school girls soccer players who survive a plane crash deep in the Ontario wilderness. The series chronicles their descent from a complicated but thriving team to warring clans that are able to survive for 19 months. The show also picks up 25 years later, tracking the lives the survivors have attempted to piece back together as adults — while revealing the truth about their survival.

What do you think? Which season one episodes of the Yellowjackets TV series do you rate as wonderful, terrible, or somewhere between? Do you think that Yellowjackets should be cancelled or renewed for a second season on Showtime? Don’t forget to vote, and share your thoughts, below.

*12/17/21 update: Yellowjackets has been renewed for a second season.