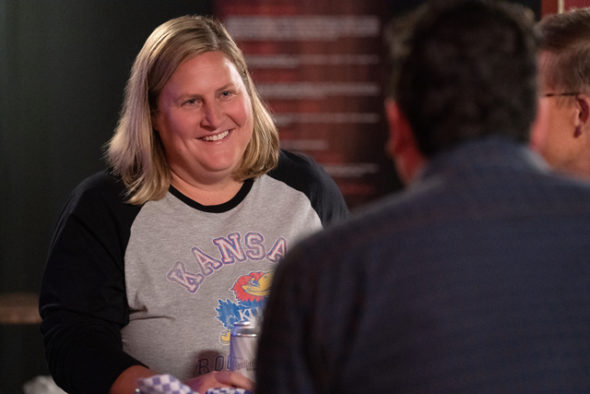 TV show description:
A dramedy series, the Somebody Somewhere TV show was created by Hannah Bos and Paul Thureen.

The story follows Sam (Everett), a true Kansan who struggles to fit the hometown mold. Grappling with loss and acceptance, Sam’s saving grace is singing and it leads her on a journey to discover herself and a community of outsiders who don’t fit in but don’t give up.

Joel (Hiller) has vision-board dreams of Faith, Family, and high-end kitchen appliances but they are ripped to pieces in a spiral of joy, shame, music, and stress rashes, after he befriends his high school idol, Sam. Michael (Odom) is Joel’s boyfriend who suddenly finds himself playing second fiddle to Sam.

Tricia Miller (Garrison) is Sam’s resentful and scrappy sister, who is exhausted from trying to live up to hometown expectations. Rick (McCarthy) is Sam’s quietly unremarkable brother-in-law, whose secret sends Sam and Joel’s imaginations spinning. Charity (Johanningmeier) is the co-owner of the Tender Moments store with Tricia.

Family patriarch Ed Miller (Hagerty) is a stoic Kansas farmer who believes in keeping his head down and avoiding uncomfortable things. He eventually learns that ignoring problems only makes them grow. Mary Jo (Brody) is Sam’s mother who’s struggling with alcoholism.

Finally, Fred Rococo (Hill) is a University soil scientist by day, Master of Ceremonies in a flashy suit by night. He’s been through it all, done the work, and found his stable place of happiness in the land of sunflowers.

What do you think? Do you like the Somebody Somewhere TV show? Do you think it should be cancelled or renewed for another season?