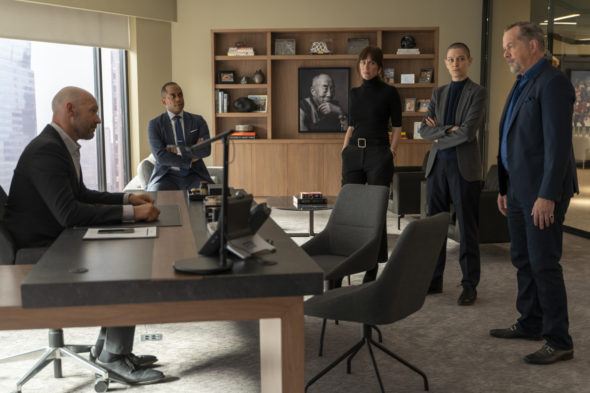 Will this show survive the departure of one of its stars? Has the Billions TV show been cancelled or renewed for a seventh season on Showtime? The television vulture is watching all the latest cancellation and renewal news, so this page is the place to track the status of Billions, season seven. Bookmark it, or subscribe for the latest updates. Remember, the television vulture is watching your shows. Are you?

Airing on the Showtime cable channel, the Billions TV show stars Paul Giamatti, Corey Stoll, and Maggie Siff, with David Costabile, Asia Kate Dillon, Condola Rashad, Jeffrey DeMunn, and Daniel Breaker. In season six, Axe (Damian Lewis) is gone and Michael Prince (Stoll) has assumed his place. Now, Chuck Rhoades (Giamatti) must develop a new strategy that is keener and more sophisticated than before. All the players, from Wags (Costabile) to Wendy (Siff), from Taylor (Dillon) to Sacker (Rashad), and of course Senior (DeMunn), must sharpen their weapons and look for new alliances in order to survive. The ground is ever-shifting and the stakes absolute. New king, new war, new rules.

The sixth season of Billions averaged a 0.04 rating in the 18-49 demographic and 321,000 viewers in the live+same day ratings (includes all DVR playback through 3:00 AM). Compared to season five, that’s down by 52% in the demo and down by 35% in viewership. While these numbers don’t include further delayed or streaming viewing, they are a very good indicator of how a show is performing, especially when compared to others on the same channel. There can be other economic factors involved in a show’s fate, but the higher-rated series are usually renewed and the lower-rated ones are cancelled. Find out how Billions stacks up against other Showtime TV shows.

Will Showtime cancel or renew Billions for season seven? This is currently the channel’s longest-running series and has done very well in the ratings in the past. The departure of Damian Lewis presents an interesting challenge. The show’s writers could use this as an opportunity to really shake things up and revitalize the series but it’s also possible that it will signal its end. We’ll have to wait and see how the viewers respond over the course of the season. I’ll update this page with breaking developments. Subscribe for free alerts on Billions cancellation or renewal news.

2/16/22 update: Billions has been renewed for a seventh season on Showtime.

What do you think? Are you glad the Billions TV show has been renewed for a seventh season? How would you feel if Showtime had cancelled this TV series, instead?

the show should be canceled 90% of the characters are useless in the storyline now. who wants to watch a billionaire win..

Love this show so goood legal drama. Look forward to seeing it every Sunday night. Never missed any episode of it.