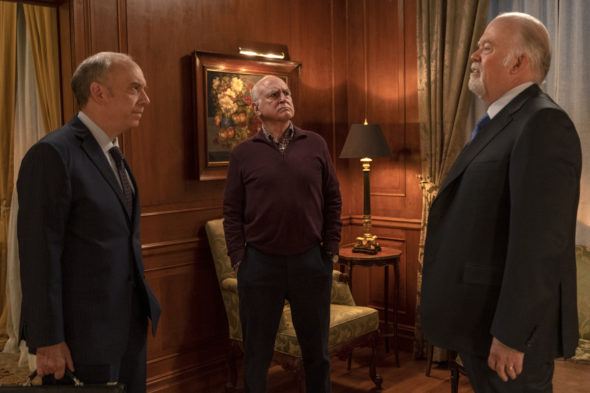 Who will come out on top in the sixth season of the Billions TV show on Showtime? As we all know, the Nielsen ratings typically play a big role in determining whether a TV show like Billions is cancelled or renewed for season seven. Unfortunately, most of us do not live in Nielsen households. Because many viewers feel frustrated when their viewing habits and opinions aren’t considered, we invite you to rate all of the sixth season episodes of Billions here. *Status Update Below.

A Showtime finance and legal drama, the Billions TV show stars Paul Giamatti, Corey Stoll, and Maggie Siff, with David Costabile, Asia Kate Dillon, Condola Rashad, Jeffrey DeMunn, and Daniel Breaker. In season six, Axe (Damian Lewis) is gone and Michael Prince (Stoll) has assumed his place. Now, Chuck Rhoades (Giamatti) must develop a new strategy that is keener and more sophisticated than before. All the players, from Wags (Costabile) to Wendy (Siff), from Taylor (Dillon) to Sacker (Rashad), and of course Senior (DeMunn), must sharpen their weapons and look for new alliances in order to survive. The ground is ever-shifting and the stakes absolute. New king, new war, new rules.

What do you think? Which season six episodes of the Billions TV series do you rate as wonderful, terrible, or somewhere between? Do you think that Billions should be cancelled or renewed for a seventh season on Showtime? Don’t forget to vote, and share your thoughts, below.

*2/16/22 update: Billions has been renewed for a seventh season on Showtime.

Let’s examine the change from Axe to Prince. Prince is not conducting insider trading or any of the criminal activity that Axe had done. He is trying to do good for NYC, albeit to set himself up for POTUS. This is where the plot makes zero sense. Rhoades doesn’t like prince because he is a successful Billionaire. So like he has always done, he himself breaks the law as an Attorney General. Granted he did need to do these things to combat Axe, because he was ruthless. So basically the writers actually must be of the woke mind. Because they… Read more »

Please boost your ratings so good this season. So good enjoy it and love it every Sunday night legal drama. Never missed any episodes of it this.

Season 6 of Billions is a disaster