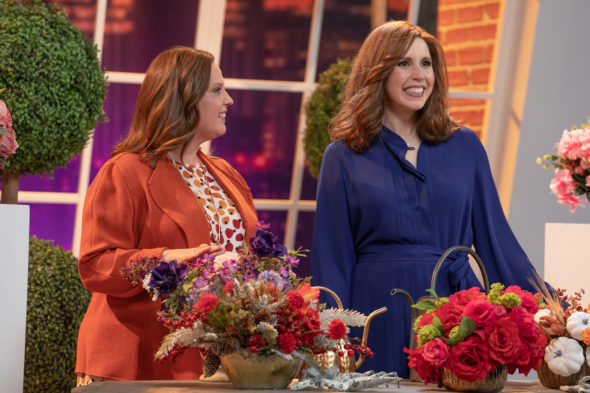 Is showbiz all it’s cracked up to be? Has the I Love That for You TV show been cancelled or renewed for a second season on Showtime? The television vulture is watching all the latest cancellation and renewal news, so this page is the place to track the status of I Love That for You, season two. Bookmark it, or subscribe for the latest updates. Remember, the television vulture is watching your shows. Are you?

Airing on the Showtime cable channel, the I Love That for You TV show stars Vanessa Bayer, Molly Shannon, Jenifer Lewis, Paul James, Ayden Mayeri, Matt Rogers, and Punam Patel with Johnno Wilson in a recurring role. The story is inspired by Bayer’s own story of overcoming childhood leukemia. Joanna Gold (Bayer) dreams of becoming a host at a home shopping channel. Working to shed her life-long label as “that cancer girl,” she moves away from her parents and starts a budding romance for the first time in her adult life. Joanna also forms a meaningful friendship with her idol, Jackie (Shannon), the charismatic star of the shopping channel. This all happens against the backdrop of a highly competitive workplace where people play dirty to succeed. The CEO of the popular channel is Patricia (Lewis), the icy and enigmatic founder.

The first season of I Love That for You averages a 0.01 rating in the 18-49 demographic and 65,000 viewers in the live+same day ratings (including DVR playback through 3:00 AM). While these numbers don’t include further delayed or streaming viewing, they are a very good indicator of how a show is performing, especially when compared to others on the same channel. There can be other economic factors involved in a show’s fate, but typically the higher-rated series are renewed and the lower-rated ones are cancelled. Find out how I Love That for You stacks up against other Showtime TV shows.

Will Showtime cancel or renew I Love That for You for season two? The ratings could be a lot better but they aren’t unusual for a Showtime comedy. I think this show has a 50/50 chance of being renewed. I’ll update this page with breaking developments. Subscribe for free alerts on I Love That for You cancellation or renewal news.

I Love That for You Cancellation & Renewal Related Links

What do you think? Do you hope that the I Love That for You TV show will be renewed for a second season? How would you feel if Showtime cancelled this TV series, instead?