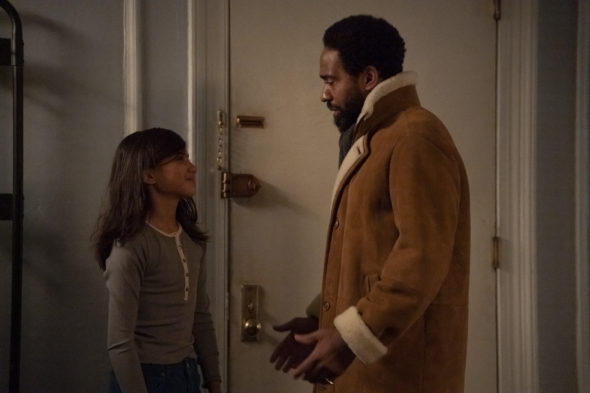 Mark is a very devoted father. Can this show find a devoted audience? Has the Let the Right One In TV show been cancelled or renewed for a second season on Showtime? The television vulture is watching all the latest cancellation and renewal news, so this page is the place to track the status of Let the Right One In, season two. Bookmark it, or subscribe for the latest updates. Remember, the television vulture is watching your shows. Are you?

A psychological thriller and supernatural drama airing on the Showtime cable channel, the Let the Right One In TV show was inspired by the Swedish novel by John Ajvide Lindqvist and the film. It stars Demián Bichir, Anika Noni Rose, Madison Taylor Baez, Grace Gummer, Ian Foreman, Jacob Buster, Nick Stahl, and Kevin Carroll. The story revolves around Mark Kane (Bichir) and his daughter Eleanor (Baez). Their lives were changed forever when, 10 years ago, she was turned into a vampire. Locked in at age 12, perhaps forever, Eleanor lives a closed-in life and is able to go out only at night. Meanwhile, her father does his best to provide her with the human blood she needs to stay alive. Now, they’ve returned home to New York City after a decade away, desperate to find a cure.

The first season of Let the Right One In averages approximately a 0.02 rating in the 18-49 demographic and 54,000 viewers in the live+same day ratings (including DVR playback through 3:00 AM). (The ratings are quite low, so there are some gaps in our reporting of them.) While these numbers don’t include further delayed or streaming viewing, they are a very good indicator of how a show is performing, especially when compared to others on the same channel. There can be other economic factors involved in a show’s fate, but typically the higher-rated series are renewed and the lower-rated ones are cancelled. Find out how Let the Right One In stacks up against other Showtime TV shows.

Let the Right One In Cancellation & Renewal Related Links

What do you think? Do you hope that the Let the Right One In TV show will be renewed for a second season? How would you feel if Showtime cancelled this TV series, instead?

Love love love vampire movies. Nobody ever makes them anymore. So yes please renew for a second season, YALL just need to show a little more biting with a little less mauling. Just trying to let y’all know what people look for in their vampire movies or series. I’ll be looking forward to a second season because y’all kinda left us hanging.