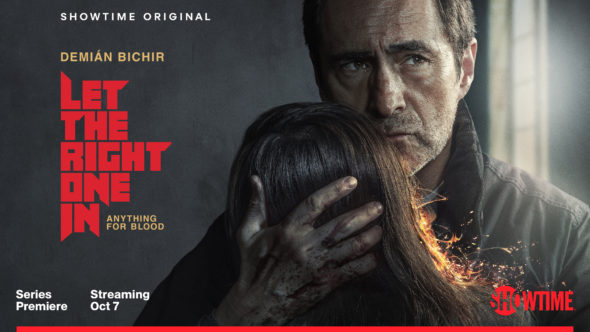 Vampire TV shows have found great success on television in the past but Let the Right One In is hardly a typical bloodsucker tale. Will this Showtime series find a big enough audience to land a second season renewal, or will it be cancelled after 10 episodes? Stay tuned.

A psychological horror drama series, the Let the Right One In TV show was inspired by the Swedish novel by John Ajvide Lindqvist and the film. It stars Demián Bichir, Anika Noni Rose, Madison Taylor Baez, Grace Gummer, Ian Foreman, Jacob Buster, Nick Stahl, and Kevin Carroll. The story revolves around Mark Kane (Bichir) and his daughter Eleanor (Baez). Their lives were changed forever when, 10 years ago, she was turned into a vampire. Locked in at age 12, perhaps forever, Eleanor lives a closed-in life and is able to go out only at night. Meanwhile, her father does his best to provide her with the human blood she needs to stay alive. Now, they’ve returned home to New York City after a decade away, desperate to find a cure.

Note: The ratings for this series are very low, so there may be gaps in our reporting of them.

What do you think? Do you like the Let the Right One In TV series on Showtime? Should it be cancelled or renewed for a second season?

Really is one of those tv show that I need to see every day. Please make 2 season for us

i love this show don’t cancel it keep it going

Would love to see ot continue its riveting

Really enjoyed it. Please consider having another season

This show has great potential-cannot wait to see what happens next. The vampire girl plays a great part-cute when needed, then creepy when needed!