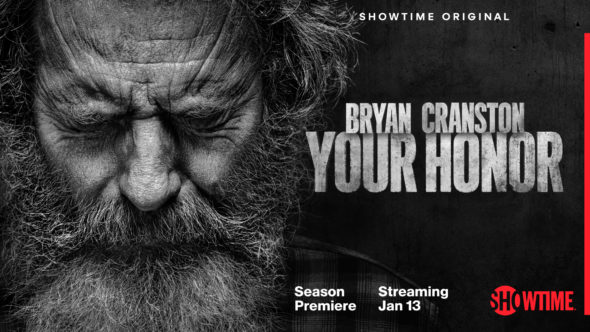 We don’t have to wonder if Your Honor will be cancelled or renewed for a third season. It’s already been announced that season two is the end. As you may recall, the Showtime series was initially supposed to be a one-season series, but after its success in the ratings, the show was revived. Will Showtime regret that decision or wish there had been a third season? Stay tuned.

A crime drama series, the Your Honor TV series stars Bryan Cranston, Rosie Perez, Michael Stuhlbarg, Hope Davis, Lilli Kay, Jimi Stanton, Benjamin Flores Jr., Andrene Ward-Hammond, Isiah Whitlock Jr., and Keith Machekanyanga. Guests include Margo Martindale and Amy Landecker. Michael Desiato (Cranston) was a highly-respected New Orleans judge whose personal and professional lives were turned upside down when his teenage son, Adam (Hunter Doohan), is involved in a hit-and-run. In season two, Michael has lost the will to live and any semblance of the upstanding judge he once was before the death of his son, Adam. But his life is thrown yet again into chaos by the arrival of Olivia Delgado (Perez), a laser-focused federal prosecutor determined to bring down a major crime organization. Meanwhile, crime boss Jimmy Baxter (Stuhlbarg) is looking to go legit, but a war is brewing at home with his formidable wife, Gina (Davis), who has other ideas for the family business.

What do you think? Do you like the Your Honor TV series on Showtime? Do you wish there could be a third season?