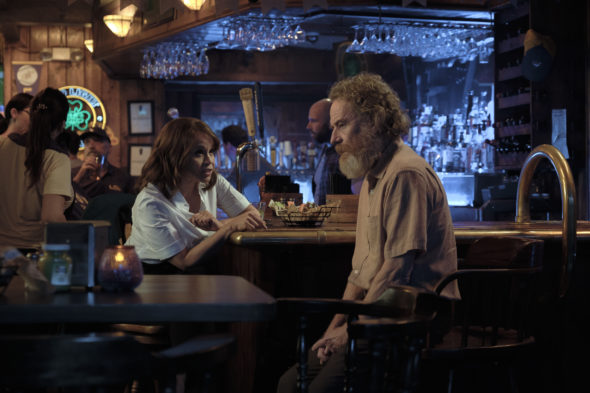 Can Michael Desiato find the closure he needs? Has the Your Honor TV show been cancelled or renewed for a third season on Showtime? The television vulture is watching all the latest cancellation and renewal news, so this page is the place to track the status of Your Honor, season three. Bookmark it, or subscribe for the latest updates. Remember, the television vulture is watching your shows. Are you?

A crime drama series airing on the Showtime cable channel, the Your Honor TV series stars Bryan Cranston, Rosie Perez, Michael Stuhlbarg, Hope Davis, Lilli Kay, Jimi Stanton, Benjamin Flores Jr., Andrene Ward-Hammond, Isiah Whitlock Jr., and Keith Machekanyanga. Guests include Margo Martindale and Amy Landecker. Michael Desiato (Cranston) was a highly-respected New Orleans judge whose personal and professional lives were turned upside down when his teenage son, Adam (Hunter Doohan), is involved in a hit-and-run. In season two, Michael has lost the will to live and any semblance of the upstanding judge he once was before the death of his son, Adam. But his life is thrown yet again into chaos by the arrival of Olivia Delgado (Perez), a laser-focused federal prosecutor determined to bring down a major crime organization. Meanwhile, crime boss Jimmy Baxter (Stuhlbarg) is looking to go legit, but a war is brewing at home with his formidable wife, Gina (Davis), who has other ideas for the family business.

Airing on Sunday nights, the second season of Your Honor averages a 0.04 rating in the 18-49 demographic and 251,000 viewers. Compared to season one, that’s down by 46% in the demo and down by 58% in viewership in the live+same day ratings (includes DVR playback through 3:00 AM). While these numbers don’t include further delayed or streaming viewing, they are a very good indicator of how a show is performing, especially when compared to others on the same channel. There can be other economic factors involved in a show’s fate, but typically the higher-rated series are renewed and the lower-rated ones are cancelled. Find out how Your Honor stacks up against other Showtime TV shows.

We don’t have to wonder if Showtime will cancel Your Honor since it’s already been announced that season two is the end.   Subscribe for free alerts on Your Honor cancellation or renewal news.

What do you think? Do you wish the Your Honor TV show should have been renewed for a third season? Is two seasons a good place to end this Showtime series?

I can’t believe Showtime has canceled Your Honor. We have loved it. How in the world could this show have been cancelled with the great story line and even more exceptional actors.