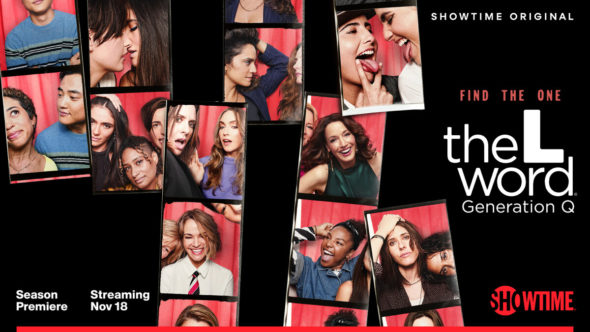 The ratings for this Showtime series have always been low, and this time around appears to be no exception. Will there continue to be enough interest in The L Word: Generation Q to justify a fourth season, or could it be cancelled? Stay tuned.

Note: The ratings for this series are very low, so there may be gaps in our reporting of them.

For comparisons: Season two of The L Word: Generation Q on Showtime averaged a 0.1 rating in the 18-49 demographic and 80,000 viewers.

What do you think? Do you like The L Word: Generation Q TV series on Showtime? Should it be cancelled or renewed for a fourth season?

The 3rd Season is “unwatchable”. The storyline is now so PC as to be laughable. Anyone who would believe the hottest lesbian Shane who never met a clitoris she didn’t want to make happy would now be in love with a Transwomen? Please…maybe Alice but not Shane. It has been all downhill since they neutered Shane. Laurel and Jennifer aren’t the only two actors who made the right decision to leave the show. I still watch the original L Word and love every minute of it.

I want Gigi Back

So far, the ratings for all but the season opener have been below the top 150 on cable so we aren’t able to get them. If that changes, we’ll add them. Sorry.

how long have you known that coz i have been waiting patiently for them the ratings are very important to me and thousands of loyal followers like myself and can i ask it says author beside ur name wat does that actually mean coz dave is the founder right?

I told you that they’ve become difficult to obtain from the start of the season. Sorry to disappoint you, but it’s beyond our control.

Trevor. Don’t even bother trying to track this series. The way it’s going I would rather watch paint dry. I strongly believe that Showtime wants this show permanently gone and will let it sink deeper than the Titanic. I have surrendered my deck chair. Thank you for reporting what data you had.

The cable ratings for Sunday typically come out on Tuesday mornings. They were delayed due to the Thanksgiving holiday. Unfortunately, because the linear ratings for this show are so low, they are challenging to obtain. We’ll add them as we can get them.

do you think it could be cancelled after episode 10

It’s my understanding that the show picks up a good amount of streaming and delayed viewers but we don’t have access to those numbers. If subscribers lose interest, it absolutely could be cancelled.

If the streaming numbers are good, why doesn’t it get acknowledged with the other shows Showtime makes a point to tell us does well on streaming? It’s one thing to see Yellowjackets getting loads and loads of articles praising it’s streaming numbers. But even The Chi articles point to a 20% rise from last season, while with Gen Q all we get are crickets and noticeably barely any promo. So it’s hard to think this is doing anything on streaming. And i’ll be shocked if this gets renewed. Showtime has never hidden the fact that they don’t care about this… Read more »

It is December 5 and why are the ratings for this show delayed? Still waiting on Episode 2. please post updated numbers. Thank you

She was not happy

i know i believe it was coz of marja

Everything is cuz of Marja AND Ilene. Don’t forget Ilene hired her and could have just as easily fired her. Ilene knew everything that was going on.

Ilene not firing her is baffling. Also it’s because Jennifer Beals is super close to Ilene Chaiken, I don’t buy any of this talk that Jennifer went to Showtime and asked them to replace the Marja. Wouldn’t Jennifer Beals of all people know it would be hard to get rid of a showrunner of a show the network obviously could careless about and even her bff Ilene Chaiken didn’t oust?