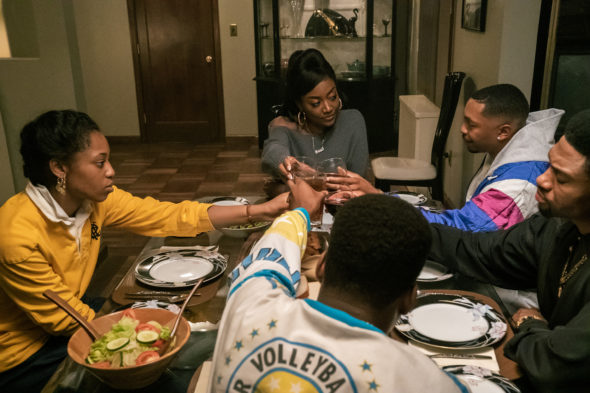 Raq could be in over her head. Has the Power Book III: Raising Kanan TV show been cancelled or renewed for a third season on Starz? The television vulture is watching all the latest cancellation and renewal news, so this page is the place to track the status of Raising Kanan, season three. Bookmark it, or subscribe for the latest updates. Remember, the television vulture is watching your shows. Are you?

Airing on the Starz television network, Power Book III: Raising Kanan stars MeKai Curtis, Patina Miller, Omar Epps, London Brown, Malcolm Mays, Hailey Kilgore, Joey Bada$$, Shanley Caswell, and Antonio Ortiz. Set in the 90s and South Jamaica, Queens, this show’s story revolves around the coming of age of Kanan Stark (Curtis “50 Cent” Jackson) of the original Power TV series. When we catch up with fifteen-year-old Kanan (Curtis) in the prequel, he is the only child of Raquel “Raq” Thomas (Miller), a cocaine distributor with an emerging network of dealers across the city. She’s a fierce and successful woman who is a force of nature and her son is anxious to join his family’s growing business. In season two, Raq now controls the borough’s distribution. As her power grows, so does her appetite. Raq’s eager to expand the operation and sets her sights on New Jersey. But with new territory, comes new foes, and this time it’s the Jersey Mafia. As Raq looks to the Garden State, another battle brews back home: the fight for her son’s trust. Kanan escaped Queens after putting two bullets into the chest of Detective Malcolm Howard (Epps). But Kanan returns home to find that Howard and the dangerous secret he holds (he is Kanan’s father) are both alive and well.

The second season of Power Book III: Raising Kanan averages a 0.06 rating in the 18-49 demographic and 246,000 viewers in the live+same day ratings (includes all DVR playback through 3:00 AM). Compared to season one, that’s down by 49% in the demo and down by 37% in viewership. While these numbers don’t include further delayed or streaming viewing, they are a very good indicator of how a show is performing, especially when compared to others on the same channel. Though other economic factors are involved, the higher-rated shows usually get renewed and the lower-rated ones get cancelled. Find out how Power Book III: Raising Kanan stacks up against other Starz TV shows.

What do you think? Are you glad that the Power Book III: Raising Kanan TV show has been renewed for a third season? How would you feel if Starz had cancelled this TV series, instead?