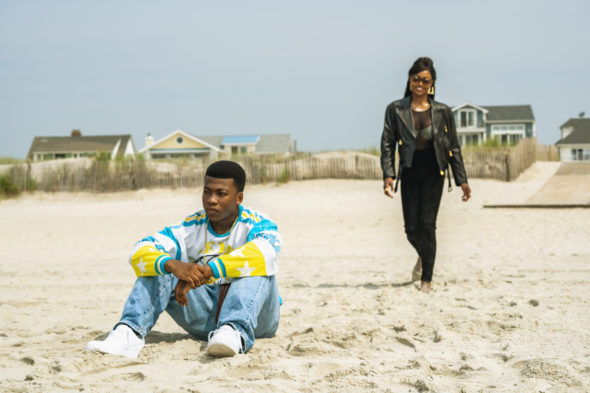 Young Kanan has a rocky road ahead in the second season of the Power Book III: Raising Kanan TV show on Starz. As we all know, the Nielsen ratings typically play a big role in determining whether a TV show like Raising Kanan is cancelled or renewed for season three. Unfortunately, most of us do not live in Nielsen households. Because many viewers feel frustrated when their viewing habits and opinions aren’t considered, we invite you to rate all of the second season episodes of Power Book III: Raising Kanan here.

A Starz family and crime drama series, Power Book III: Raising Kanan stars MeKai Curtis, Patina Miller, Omar Epps, London Brown, Malcolm Mays, Hailey Kilgore, Joey Bada$$, Shanley Caswell, and Antonio Ortiz. Set in the 90s and South Jamaica, Queens, this show’s story revolves around the coming of age of Kanan Stark (Curtis “50 Cent” Jackson) of the original Power TV series. When we catch up with fifteen-year-old Kanan (Curtis) in the prequel, he is the only child of Raquel “Raq” Thomas (Miller), a cocaine distributor with an emerging network of dealers across the city. She’s a fierce and successful woman who is a force of nature and her son is anxious to join his family’s growing business. In season two, Raq now controls the borough’s distribution. As her power grows, so does her appetite. She’s eager to expand the operation and sets her sights on New Jersey. But with new territory, comes new foes, and this time it’s the Jersey Mafia. As Raq looks to the Garden State, another battle brews back home: the fight for her son’s trust. Kanan escaped Queens after putting two bullets into the chest of Detective Malcolm Howard (Epps). But Kanan returns home to find that Howard and the dangerous secret he holds (he is Kanan’s father) are both alive and well.

What do you think? Which season two episodes of the Raising Kanan TV series do you rate as wonderful, terrible, or somewhere between? Are you glad that Power Book III: Raising Kanan has been renewed for a third season on Starz?