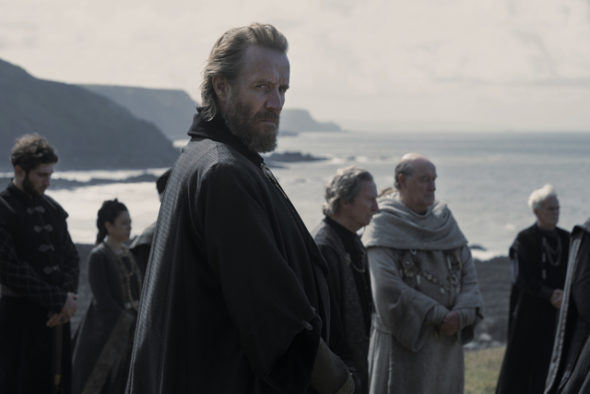 An HBO fantasy series, the House of the Dragon TV show is based on George R.R. Martin’s Fire & Blood novel and is a prequel to Game of Thrones. It stars Paddy Considine, Matt Smith, Olivia Cooke, Emma D’Arcy, Steve Toussaint, Eve Best, Fabien Frankel, Sonoya Mizuno, and Rhys Ifans. Additional cast includes Milly Alcock, Bethany Antonia, Phoebe Campbell, Emily Carey, Harry Collett, Ryan Corr, Tom Glynn-Carney, Jefferson Hall, David Horovitch, Wil Johnson, John Macmillan, Graham McTavish, Ewan Mitchell, Theo Nate, Matthew Needham, Bill Paterson, Phia Saban, Gavin Spokes, and Savannah Steyn. The series tells the story of House Targaryen. King Viserys Targaryen (Considine) is chosen by the lords of Westeros to succeed his grandfather, the Old King, Jaehaerys Targaryen, at the Great Council at Harrenhal. Prince Daemon Targaryen (Smith) is the younger brother to King Viserys and heir to the throne. Princess Rhaenyra Targaryen (D’Arcy) is the king’s first-born child. She is of pure Valyrian blood and a dragonrider but, perhaps most importantly, she was not born a man. Lord Corlys Velaryon (Toussaint), aka “The Sea Snake, is the head of the House Velaryon. The most famed nautical adventurer in the history of Westeros, his house is even richer than the Lannisters and claims the largest navy in the world. His wife is Princess Rhaenys Targaryen (Best), a dragonrider who was passed over as heir to the throne because the realm favored her cousin, Viserys, simply for being male. Otto Hightower (Ifans) is the Hand of the King and loyally and faithfully serves both his king and his realm. As the Hand sees it, the greatest threat to the realm is the king’s brother, Daemon, and his position as heir to the throne. Alicent (Cooke) is his daughter and the most comely woman in the Seven Kingdoms. Raised in the Red Keep, close to the king and his innermost circle, she possesses both a courtly grace and a keen political acumen.

*8/26/22 update: HBO has renewed the House of the Dragon TV series for a second season.

Can’t we find a st George to get rid of the dragon. Even after after the intro programme it ha no feel for GOT,s except 5he violence
Kill it.

What a showstopping start to this series! Excellent, can’t wait for next week!

I found the first episode of House of the Dragon to be eyepopping, energetic, politically realistic, and intriguing – exactly what one would expect from a series and storyline of this nature. Overall acting was superb. The clash of armored knights on horseback and the amphitheater architectural backdrop were particularly noteworthy. The NYT reviewer of this series was nothing more than a pretentious highbrow who boasted that he had no intention of viewing it – as if anyone would care. (How can you review something that you’ve never seen?!) No Bosley Crowther he. And for all those who still complain… Read more »