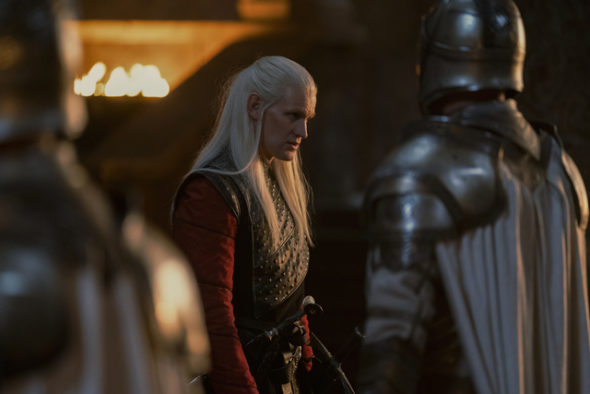 Heavy is the head that wears the crown — especially in this family. Has the House of the Dragon TV show been cancelled or renewed for a second season on HBO? The television vulture is watching all the latest cancellation and renewal news, so this page is the place to track the status of House of the Dragon, season two. Bookmark it, or subscribe for the latest updates. Remember, the television vulture is watching your shows. Are you?

Airing on the HBO television network, the House of the Dragon TV show is based on George R.R. Martin’s Fire & Blood novel and is a prequel to Game of Thrones. It stars Paddy Considine, Matt Smith, Olivia Cooke, Emma D’Arcy, Steve Toussaint, Eve Best, Fabien Frankel, Sonoya Mizuno, and Rhys Ifans. Additional cast includes Milly Alcock, Bethany Antonia, Phoebe Campbell, Emily Carey, Harry Collett, Ryan Corr, Tom Glynn-Carney, Jefferson Hall, David Horovitch, Wil Johnson, John Macmillan, Graham McTavish, Ewan Mitchell, Theo Nate, Matthew Needham, Bill Paterson, Phia Saban, Gavin Spokes, and Savannah Steyn. The series tells the story of House Targaryen. King Viserys Targaryen (Considine) is chosen by the lords of Westeros to succeed his grandfather, the Old King, Jaehaerys Targaryen, at the Great Council at Harrenhal. Prince Daemon Targaryen (Smith) is the younger brother to King Viserys and heir to the throne. Princess Rhaenyra Targaryen (D’Arcy) is the king’s first-born child. She is of pure Valyrian blood and a dragonrider but, perhaps most importantly, she was not born a man. Lord Corlys Velaryon (Toussaint), aka “The Sea Snake, is the head of the House Velaryon. The most famed nautical adventurer in the history of Westeros, his house is even richer than the Lannisters and claims the largest navy in the world. His wife is Princess Rhaenys Targaryen (Best), a dragonrider who was passed over as heir to the throne because the realm favored her cousin, Viserys, simply for being male. Otto Hightower (Ifans) is the Hand of the King and loyally and faithfully serves both his king and his realm. As the Hand sees it, the greatest threat to the realm is the king’s brother, Daemon, and his position as heir to the throne. Alicent (Cooke) is his daughter and the most comely woman in the Seven Kingdoms. Raised in the Red Keep, close to the king and his innermost circle, she possesses both a courtly grace and a keen political acumen.

The first season of House of the Dragon averages a 0.47 rating in the 18-49 demographic and 1.95 million viewers in the live+same day ratings (including DVR playback through 3:00 AM). While these numbers don’t include further delayed or streaming viewing, they are a very good indicator of how a show is performing, especially when compared to others on the same channel. There can be other economic factors involved in a show’s fate, but typically the higher-rated series are renewed and the lower-rated ones are cancelled. Find out how House of the Dragon stacks up against other HBO TV shows.

Note: According to HBO, the series premiere drew 9.986 million viewers across linear and HBO Max platforms on the night of August 21st. It’s HBO’s biggest series premiere to date.

Will HBO cancel or renew House of the Dragon for season two? Game of Thrones was incredibly successful for the cable channel, and this prequel series could be even bigger. I do not doubt that it will be renewed.  I’ll update this page with breaking developments. Subscribe for free alerts on House of the Dragon cancellation or renewal news.

8/26/22 update: HBO has renewed the House of the Dragon TV series for a second season.

What do you think? Are you glad that the House of the Dragon TV show has been renewed for a second season? Did you think that there was a chance that this series would be cancelled?

Jim: Don’t worry, you’re not missing anything. After enduring a tremendously boring Episode 4, just wondering how many heads will roll at HBO for the decision to renew the series for another season

I wish I could see it but I can’t afford to buy another premium channel. Maybe if it gets on Netflix or Amazon prime which I have I watch.