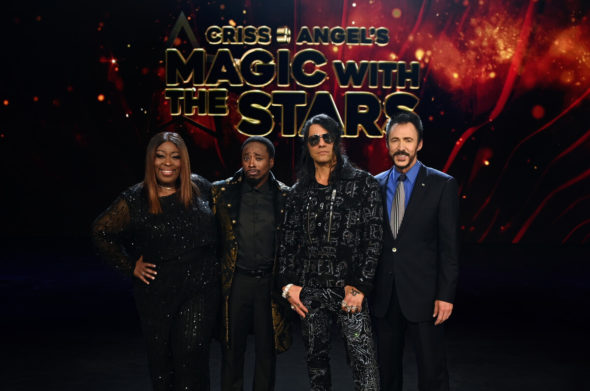 Criss Angel’s Magic with the Stars is coming to The CW later this month, and the network has announced the celebrity guest lineup for the series. On each new episode, viewers will see two celebrities train with Angel and learn some magic. The celebrities are a mix of reality stars, athletes, and actors, and include Bree Bassinger (DC’s Stargirl), Olympic figure skater Johnny Weir, and Maksim Chmerkovskiy (Dancing with the Stars).

The CW revealed more about the new series in a press release.

In each episode of CRISS ANGEL’S MAGIC WITH THE STARS, two celebrities train with Criss and learn his award-winning, revolutionary magic to compete and create a mind-blowing series of magic performances. The celebrity competitors are tasked with mastering three major categories of magic which they perform in front of a panel of three judges: “the number one magician on the planet” (Las Vegas Sun), Criss Angel (“Criss Angel MINDFREAK,” “AMYSTIKA,” “RAW”), Emmy(R) Award-winning comedian Loni Love (“E! News”) and master magician Lance Burton. In each episode, the highest-scoring celebrity will win the coveted Golden Wand. The series is filmed on the AMYSTIKA stage in the Criss Angel Theater at Planet Hollywood Resort and Casino Las Vegas, with acclaimed comedian and actor Eddie Griffin (“Undercover Brother,” “A Star is Born”) serving as host.

What do you think? Are you excited to see Criss Angel’s Magic with the Stars on The CW?