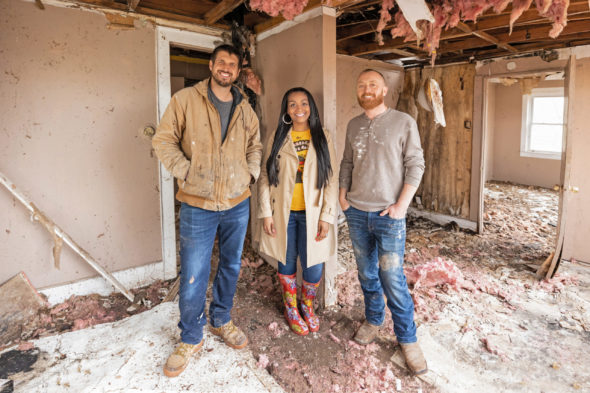 Bargain Block is returning to HGTV for a third season. The cable channel has renewed the series for 10 episodes which will arrive this summer. Starring home renovation experts and partners Keith Bynum and Evan Thomas, the series follows the pair as they restore homes in Detroit.

HGTV has picked up 10 new episodes of its popular home renovation series Bargain Block. The series, which attracted more than 18 million viewers and ranked as a top 3 non-news/sports cable series among upscale P25-54 and upscale W25-54 in its sophomore run, follows home renovation experts and partners Keith Bynum and Evan Thomas on their journey to restore Detroit’s iconic American neighborhoods one house at a time. With sound advice and support from their friend – lifetime Detroit resident and real estate expert Shea Hicks-Whitfield – Keith and Evan will buy multiple rundown and abandoned houses on a single block, take them down to the studs, and create affordable, stylish and fully furnished homes that are ideal for first-time homebuyers. The new season is scheduled to premiere in Summer 2023.

“Bargain Block fans tell me everyday how much they enjoy this series,” said Loren Ruch, group senior vice president, programming & development, HGTV. “Keith, Evan and Shea’s passion for revitalizing homes in Detroit shines in every episode as they turn forgotten properties into uniquely beautiful homes that feature Evan’s craftsmanship and Keith’s remarkable custom art and design style. They’re on a mission to improve more neighborhoods and we’ll help them get there with this new 10-episode order.”

A premiere date for Bargain Block season three will be announced at a later time.

What do you think? Are you excited about the return of Bargain Block to HGTV this summer?

I love the show and am thrilled to hear it’s coming back. The chemistry between Keith, Evan, and Shea is incredible and fun to watch and I can’t wait.

I love watching Bargain Block. It is right at home.

Cannot wait, watch reruns from season 1 and 2 over and over. Best show yet>

Love Keith and Evan and the work they do are amazing, so happy for them and cawait for season 3

Love love love these guys and this show. So positive !!

Cannot wait for season 3 of Bargain Block – just the best!

Bargain Block is one my favorite home improvement programs. The stars are entertaining and funny. I am so looking forward to Season 4.

It is my favorite renovation show on TV. They do a lot of the work themselves and really do a nice job on a budget. They truly care about the neighborhoods. The other shows so out of touch with the masses. Sick of seeing show host nail one nail in a wall and walk out and leave it to everyone else.

Love this show. So happy to it is coming back.