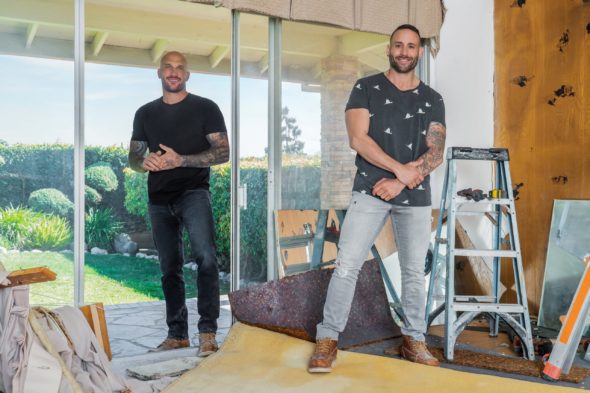 Inside Out is headed to HGTV for a second season. The series will follow duo Mike Pyle and Carmine Sabatella as they take on home renovations and tackle both the interiors and exteriors. Eight new episodes are planned.

HGTV revealed more about the series in a press release.

“Southern California home renovators Carmine Sabatella and Mike Pyle work with clients who want a stunning home transformation inside and out—and they’ll make sure they get both in a new eight-episode season of HGTV’s Inside Out. In each episode of the series, which attracted 15.3 million viewers to its freshman run, Carmine, a real estate agent and interior designer, and Mike, a landscape designer, will pitch their design plans to clients. The catch is that the budgets are set, so the guys must be persuasive to score a larger chunk of the renovation dollars. More money for Carmine will mean he can max out the home’s interior with dream amenities, while extra cash for Mike will give the property wow-factor curb appeal and major outdoor living perks. Regardless of who gets the bigger bucks, Carmine and Mike will join forces to balance their clients’ priorities and deliver cohesive, gorgeous spaces from the inside out.

In the season premiere, the duo will take on a massive project for a couple who is desperate to complete much-needed renovations to their home. Carmine will tap the potential of their interior by creating a modern kitchen with a mobile island and a spa-like main bathroom with a striking wood paneled ceiling. And, outdoors, Mike will astonish the family with a beautifully updated pool, fire pit lounge and game zone.”

The second season of Inside Out will kick off on August 1st.

What do you think? Are you excited about the return of Inside Out on HGTV?

It is one of the few great shows on HGTV.