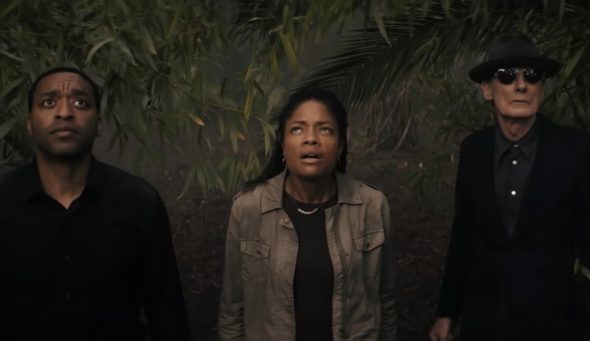 The first season of The Man Who Fell to Earth ended over the weekend, and many viewers are wondering if there will be a second season. Alex Kurtzman is behind the Showtime series, which stars Chiwetel Ejiofor, Naomie Harris, Jimmi Simpson, Rob Delaney, Sonya Cassidy, Joana Ribeiro, Annelle Olaleye, Kate Mulgrew, Clarke Peters, and Bill Nighy. The drama is a reimagining of the David Bowie film of the same name with Nighy in the role played by Bowie.

Is there a second season in the works? Per Deadline, Kurtzman said the following about the Showtime series’ future:

“You know, I think that I never like to count my chickens, and honestly, I feel like I want to approach every season of every show in some ways as if it were the last season because I think that the audience needs to feel like the journey that they just spent eight to 10 to 12 episodes on is fulfilling in and of itself.

I think halfway through the first season, it became clear we wanted a second season. Obviously, the finale sets up a lot of things. Are the aliens coming back? What is that going to look like? If Season 1 was an immigration metaphor, forget about Season 2 when they all show up. That feels like a really compelling area of attack.”

As for Ejiofor, he also spoke about a potential return of The Man Who Fell to Earth:

“I would say from my perspective, there was something very whole about it and that was what was immediately exciting. That there was a completeness to it. You know, it wasn’t the sort of structure where you kind of had all of these questions at the end and all sort of held on a cliffhanger and you don’t feel satisfied by the conclusion of it. It felt like as a performer, as an actor and also reading the script, it felt like everything had been answered in an essential way, and it also left room as well. I mean, a very exciting room for the development of the story if it went that way.”

What do you think? Do you like this Showtime series? Would you watch season two of The Man Who Fell to Earth?

This is one of the best tv series I have watched. Intelligent writing..humorous at times..interesting follow up to the original movie. Great acting from all the cast and emotionally charged so I guess there wont be a 2nd series why would there be …..I really hope that I have not made a prediction. There needs to be a 2nd season

Absolutely, a second season would be great, really enjoyed season 1!!

I liked this show and would like a season 2

Yes, I would love to see another season of this show

My goodness! If I had the money I’d pull a Bezos and pay for another season – It was THAT GOOD. Wow what an amazing show.

I certainly hope it returns for a second season. I come from a generation in which a series season ran 20-plus episodes. We now exist in a time where streaming services employ a “hit-and-run” attack for viewer loyalty. This becomes very problematic when a series only runs 8-10 episodes per season and, even if successful, may not return for another season for at least a year or two in the future. Example: “Euphoria”, which is not expected to return until 2024 at the earliest! By that time I have to believe that many viewers will have moved on. To me,… Read more »

I loved the show. I looked forward to each new episode. A second season would be awesome.

I say a second season would be awesome!

I loved the show. Sorry to see it end. Not sure where a Season 2 would go that wouldn’t be depressing or predictable.

Loved this series. One of the best on TV in a long time! Acting and story are both A++ !

There is no need for a second season, really not.

I love this show so much. It is the best show that I have ever seen on TV. I watched my recordings over and over during the week and waited with anticipation for the next episode. I hated to see the season end. I hope and pray that there will be a second season. It could be so exciting!!! The writing is superb for this show. I know that the writer can really make a great second season and more!

‘Totally agree! It’s really rare to see a streaming series that’s as intelligent, innovative and provocative as this one — AND with the acting talent to support it. ‘Would be a shame if SHOWTIME cancelled it.