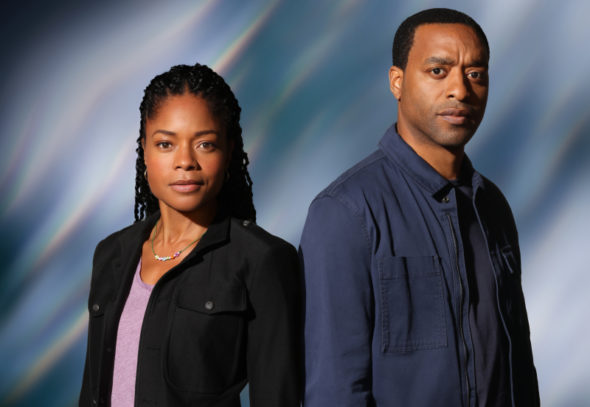 TV show description:
A sci-fi drama series, The Man Who Fell to Earth TV show was inspired by the Walter Tevis novel and the David Bowie film. Episodes are named after Bowie songs.

The story follows a new alien character (Ejiofor) who crashes into the oil fields of New Mexico at a turning point in human evolution and must confront his own past to determine our future.

The story follows a new alien character (Ejiofor) who crashes into the oil fields of New Mexico at a turning point in human evolution and must confront his own past to determine our future.

Justin Falls (Harris) is a brilliant scientist and engineer who must conquer her own demons in the race to save two worlds. Molly Falls (Olaleye) is the first human child to meet the alien and her perspective changes the course of our planet’s evolution.

Lisa Dominguez (Ribeiro) is a signals specialist at the CIA who is smart, ambitious, talented, and dedicated to her country while carrying the burden of her own secrets. She works for Spencer Clay (Simpson), a CIA agent whose obsession with the alien’s true identity drives him to the edge of madness.

The CEO of OriGen Industries, Edie Flood (Cassidy) is a woman who’s driven to her protect her family’s prominent tech company at any cost. Hatch Flood (Delaney) is the ne’er-do-well member of the family. His obsession with the work of a previous visitor from the stars causes him to lose everything, including his family.

What do you think? Do you like The Man Who Fell to Earth TV show? Do you think it should be cancelled or renewed for another season?

I know it’s unfair, but being a huge fan of Sci Fi, David Bowie and the original TMWFTE, I don’t think I can watch this. It sounds so far from the original that it seems that calling it “TMWFTE” was solely done to attract an audience. Had it been called something else entirely, without the Bowie tie-in, maybe I would have watched it. Anyway, this discussion persuades my watching the original again tonite for the many-ith time.