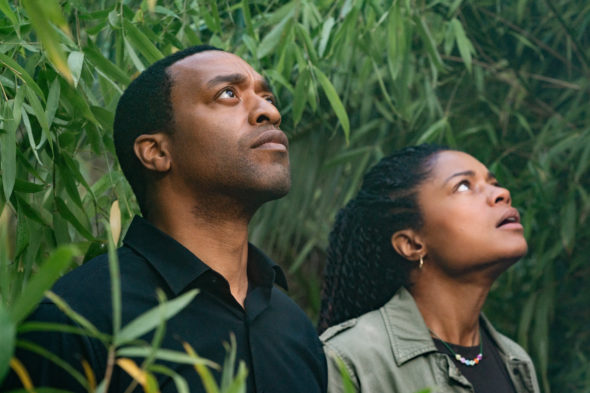 Faraday isn’t returning to Earth, or Showtime, for that matter. The cable channel has opted not to continue The Man Who Fell to Earth, so there won’t be a second season. The first season of 10 episodes finished airing in early July. The show was originally ordered to series by CBS All Access, now known as Paramount+.

A sci-fi drama series, The Man Who Fell to Earth TV show was inspired by the Walter Tevis novel and the David Bowie film. It stars Chiwetel Ejiofor, Naomie Harris, Jimmi Simpson, Rob Delaney, Sonya Cassidy, Joana Ribeiro, Annelle Olaleye, Kate Mulgrew, Clarke Peters, and Bill Nighy. The story follows a new alien character (Ejiofor) who crashes into the oil fields of New Mexico at a turning point in human evolution and must confront his own past to determine our future. Justin Falls (Harris) is a brilliant scientist and engineer who must conquer her own demons in the race to save two worlds.

Airing on Sunday nights, the first season of The Man Who Fell to Earth averages a 0.02 rating in the 18-49 demographic and 149,000 viewers in the live+same day ratings (including DVR playback through 3:00 AM). While these numbers don’t include further delayed or streaming viewing, they are a very good indicator of how a show is performing, especially when compared to others on the same channel. The series was a middle-of-the-road performer.

“Our thanks to the extraordinary Alex Kurtzman, Jenny Lumet, John Hlavin, and Sarah Timberman, who did a great job of turning the David Bowie film into such a resonant tale for our times,” a Showtime spokesperson said in a statement to THR. “And kudos to a wondrous cast led by Chiwetel Ejiofor, Naomie Harris, and Bill Nighy for bringing it to life. Alex and Jenny originally intended The Man Who Fell To Earth to be a close-ended story. While we flirted with the idea of expanding it into a second season, we all ultimately decided to embrace it as a one-season story well told.”

What do you think? Have you watched The Man Who Fell to Earth TV series on Showtime? Are you disappointed to hear that the series hasn’t been renewed for a second season, or is one season a good place to end the story?

My entire family across the country enjoyed the Man Who Fell To Earth. I had seen the original with David Bowie. This contemporary version was excellent. Showtime is unreliable in marketing and their phenomenal series just do not survive. They did same thing to Penny Dreadful, one of the best horror series ever.

Chiwetel Ejiofor acted through clinched teeth the entire time. Naomie Harris always acted frantic, despite the audience being told repeatedly that she’s a brilliant leader. Both are normally dependably great, but not in this show. I blame the unfocused script that chose agenda-pushing versus actual, entertaining storytelling.

This decision sucks. I guess only people with an IQ above 125 really understood it. Maybe it should be replaced by a series about Neanderthals that play in the mud.

That is BS!!! Who even knew before it premiered that it even existed!!! I found it by accident searching through on demand looking for a series. Corporate did a ishty job of promotion. Some idgit should be fired.

Very sorry to learn there won’t be a season 2. I really liked this show.

That is a total bummer. I have cancelled Showtime. They have other decent series but this was one of the most creative ones in recent years. The acting and recreation of the story was tops. Job well done to the team behind it and VERY sorry we will not get to see what happens next…they should give it to Hulu who seems to be doing very well with their originals….

I wish there was a season 2….i thought it was a great show, it wasn’t advertised enough for viewers to even know it existed.

I saw several episodes on Sling and I wish I could have seen them all. , but I didn’t don’t have Showtime.

We scanned the skies with rainbow eyes
And saw machines of every shape and size
We talked with tall Venusians passing through
And Peter tried to climb aboard
But the Captain shook his head and away they soared
Climbing through the ivory vibrant cloud
Someone passed some bliss among the crowd
And We walked back to the road, unchained

The Sun Machine is coming down, and we’re gonna have a party

Well this sucks I knew this was going to happen, because it happens everytime when a new show comes out and you get into it then it gets canceled like that show derbis, and this is one of the reasons why I stopped getting into shows that I end up liking because months later down the road you find out that they end up canceled yet those stupid singing shows never end up canceled like nobody cares that those people can sing because they are just going to be a sell out anyway! but back to what I was saying… Read more »

I thought the show was pretty good, and it served its purpose. It was an extension and re-imagining of the original film, and told the story well. I think having a second season would’ve brought wholly new story elements, which would have been interesting, but problematic. It’s probably best to let sleeping dogs lie, in this case.

Actually, I never expected another season.

As a fan of the 1976 movie, I’m glad they didn’t try to continue. If anything a spin off (big maybe) but I agree to leave it alone. I went into this thinking it would be a mini….wanting it to be actually.

I could not find my way into the show. OK for me it got cancelled.