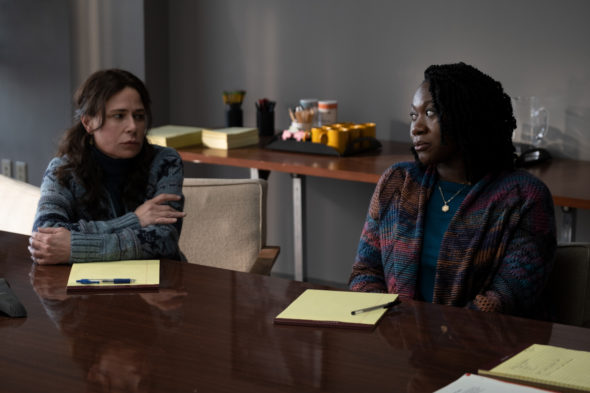 Will Harris make the right choice? Has the American Rust TV show been cancelled or renewed for a second season on Showtime? The television vulture is watching all the latest cancellation and renewal news, so this page is the place to track the status of American Rust, season two. Bookmark it, or subscribe for the latest updates. Remember, the television vulture is watching your shows. Are you?

Airing on the Showtime cable channel, the American Rust TV show is based on the novel by Philipp Meyer and stars Jeff Daniels, Maura Tierney, Bill Camp, David Alvarez, Alex Neustaedter, Julia Mayorga, Mark Pellegrino, and Rob Yang. A story of survival and transcendence, it’s told through the eyes of Del Harris (Daniels). He’s the complicated (and compromised) chief of police of a Pennsylvania Rust Belt town that’s full of good people making bad choices. When news of the murder of an ex-cop rips through the town, Harris must decide what lengths he is willing to take to protect Billy Poe (Neustaedter), the son of Grace (Tierney), the woman he loves.

The first season of American Rust averaged a 0.02 rating in the 18-49 demographic and 304,000 viewers in the live+same day ratings (including DVR playback through 3:00 AM). While these numbers don’t include further delayed or streaming viewing, they are a very good indicator of how a show is performing, especially when compared to others on the same channel. There can be other economic factors involved in a show’s fate, but typically the higher-rated series are renewed and the lower-rated ones are cancelled. Find out how American Rust stacks up against other Showtime TV shows.

Will Showtime cancel or renew American Rust for season two? Since this show is based on a novel, it could easily be a one-season series but I suspect that, given the talent involved, Showtime will take a second season if the key players want to make one. That being said, the ratings are very low so one season might be for the best. I’ll update this page with breaking developments. Subscribe for free alerts on American Rust cancellation or renewal news.

1/25/22 update: American Rust has been cancelled on Showtime.

What do you think? Were you hoping that the American Rust TV show would be renewed for a second season? Are you sorry that Showtime cancelled this TV series, instead?

Great show! Gets better with each episode! Acting is awesome! Hope there’s a season 2! Don’t agree with the critics.

Please please can we have season 2!!