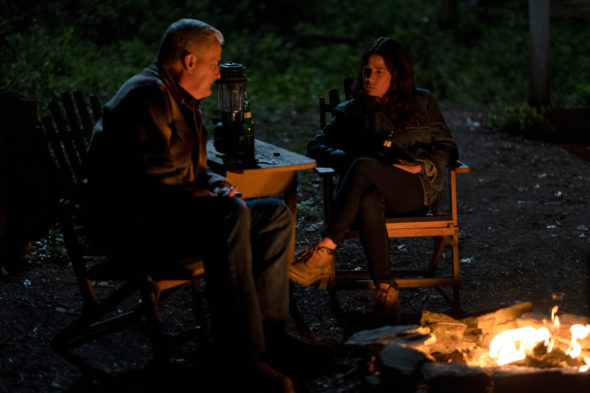 Del Harris is getting a second chance.  The American Rust TV show was cancelled by Showtime in January but the show has now been revived by the Amazon Freevee streaming service.

A family drama series, the American Rust TV show is based on the novel by Philipp Meyer and stars Jeff Daniels, Maura Tierney, Bill Camp, David Alvarez, Alex Neustaedter, Julia Mayorga, Mark Pellegrino, and Rob Yang. A story of survival and transcendence, it’s told through the eyes of Del Harris (Daniels). He’s the complicated (and compromised) chief of police of a Pennsylvania Rust Belt town that’s full of good people making bad choices. When news of the murder of an ex-cop rips through the town, Harris must decide what lengths he is willing to take to protect Billy Poe (Neustaedter), the son of Grace (Tierney), the woman he loves.

Airing on Sunday nights, the first season of American Rust averaged a 0.02 rating in the 18-49 demographic and 304,000 viewers in the live+same day ratings (including DVR playback through 3:00 AM).

“We can confirm that American Rust will not be moving forward with a second season,” reads a statement from Showtime in January. “We would like to thank our partners at Boat Rocker, our talented showrunner Dan Futterman and the rest of the wonderful writers, and our amazing cast led by Jeff Daniels and Maura Tierney.”

Based on Philipp Meyer’s critically acclaimed novel of the same name, the first season of American Rust explored the tattered American Dream in a Rust Belt town in southwest Pennsylvania through the eyes of police chief Del Harris (Daniels). Harris becomes compromised when the son of the woman he loves (Tierney) is accused of murder, and he is forced to decide what he’s willing to do to protect him. Production on the second season is scheduled to begin later this year with Daniels and Tierney returning.

“I’m grateful to Amazon Freevee for giving us the chance to make Season Two of American Rust. Set inside a struggling American small town, our authentic, realistically told story is built for streaming. The movies they don’t make anymore are being made as series at places like Amazon Freevee. It’s where I want to be,” said Jeff Daniels.

“American Rust is exactly the type of gritty and engaging storytelling Amazon Freevee audiences love, and we could not be more excited to bring this prestige series to our customers, free of charge,” said Lauren Anderson and Ryan Pirozzi, co-heads of content and programming at Amazon Freevee. “We can’t wait to dive in with Boat Rocker and Dan Futterman to continue the story that intrigued audiences during the first season, and to see the evolution of characters so expertly portrayed by Jeff and Maura in this next chapter.”

“We’re delighted to work with the wonderful team at Amazon Freevee to bring American Rust back for a second season,” said Steve Lescroart, president, Boat Rocker Studios, Scripted. “The source material for this series is incredibly rich, and when you add in the world-class talents of Dan Futterman, Jeff Daniels, Maura Tierney, Adam Rapp, and the entire cast and crew, Season Two is sure to enthrall viewers who enjoy premium content. We’re really pleased to have the opportunity to continue telling this story.”

American Rust is produced and distributed globally by Boat Rocker.

Upcoming Originals include Greg Garcia’s comedy series Sprung; and High School, a scripted series adapted for television by Clea DuVall, produced by Plan B, and based on the New York Times best-selling memoir by Grammy-nominated, platinum recording artists Tegan and Sara Quin.

ABOUT
Amazon Freevee, formerly IMDb TV
Amazon Freevee is a streaming video service with thousands of premium movies and TV shows, including Originals and FAST channels, available anytime, for free.

· Expansive Catalog: Amazon Freevee is a modern television network, offering viewers ambitious Originals, including Bosch: Legacy, the spinoff of the Prime Video series Bosch; the court program Judy Justice; the music docuseries Luke Bryan: My Dirt Road Diary; the heist drama Leverage: Redemption; the true-crime docuseries Moment of Truth; the buddy-cop drama Pretty Hard Cases; the zany true-crime docuseries Bug Out; the spy thriller Alex Rider; the Australian crime drama Troppo; and the sports docuseries UNINTERRUPTED’s Top Class: The Life and Times of the Sierra Canyon Trailblazers. Combined with an always updating library of broadly appealing hit movies and TV shows across a wide selection of genres, and a catalog of more than 75 FAST channels, Freevee delivers customers the content they would expect to see on a paid service.

· Free: The entire catalog of content on the service is free. No paid subscriptions necessary.

What do you think? Have you enjoyed the American Rust TV show on Showtime? Do you plan to watch the second season on Amazon Freevee?

I really enjoyed this series. Will be looking forward to seeing the 2nd season

Will FreeVee air the first season before showing the second to those of us without Showtime?

So happy to hear that “American Rust” will be coming back.

Great news! We canceled Directv in Jan and are streaming only now. American Rust was one of the Showtime shows I was going to miss.

A story that portrays a bleakness in rural United States you don’t see too often in a series. Daniels and Tierney lending their gravitas makes for a decent series. And it was cancelled without a good ending, so I am very pleased that it is picked up again.

Good news to hear it. Love Jeff Daniel good actor and what ever he in its always good story.