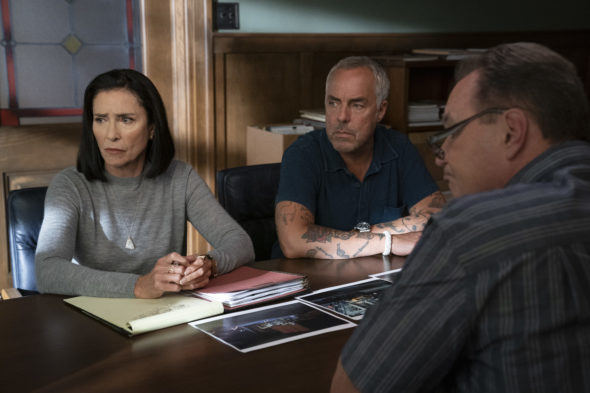 Will Harry be happy he traded his police badge for a PI license? Has the Bosch: Legacy TV show been cancelled or renewed for a second season on Amazon FreeVee? The television vulture is watching all the latest cancellation and renewal news, so this page is the place to track the status of Bosch: Legacy, season two. Bookmark it, or subscribe for the latest updates. Remember, the television vulture is watching your shows. Are you?

Streaming on the Amazon FreeVee subscription service, the Bosch: Legacy TV show is a sequel to the Bosch series which ran for seven seasons. Based on the novels of Michael Connelly, the show stars Titus Welliver, Mimi Rogers, Madison Lintz, Stephen A. Chang, and Denise G. Sanchez. The story follows former LAPD detective Harry Bosch (Welliver) as he begins a new chapter as a private investigator. He finds himself working with one time enemy and top-notch attorney Honey “Money” Chandler (Rogers). Without the badge, Bosch finds an invaluable resource in tech-forward gadget whiz Maurice “Mo” Bassi (Chang). Meanwhile, Bosch’s daughter Maddie (Lintz) ventures into the world of the LAPD as a rookie patrol officer. She’s paired with Reina Vasquez (Sanchez), a no-nonsense, hard-charging training officer.

Unless they decide to publicize viewership, it is typically difficult to predict whether Amazon FreeVee will cancel or renew a show like Bosch: Legacy for season two. In this case, there’s no need to wonder because the show has already been renewed. I will update this page with breaking developments. Subscribe for free alerts on Bosch: Legacy cancellation or renewal news.

What do you think? Are you glad that the Bosch: Legacy TV show has been renewed for a second season? How would you feel if Amazon FreeVee cancelled this TV series, instead?

I loved Bosch series and now Bosch Legacy. I really hope there will be a second season.