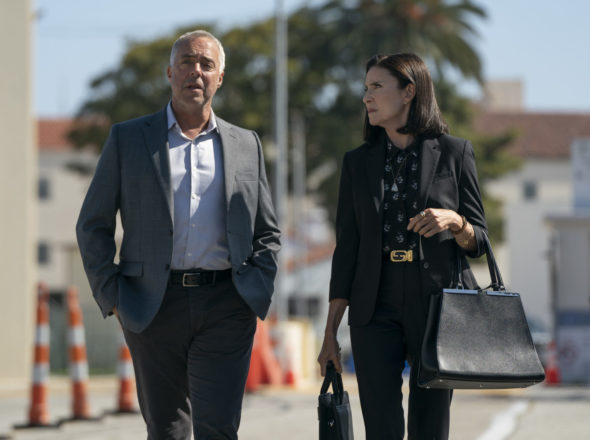 TV show dates: May 6, 2022 — present
Series status: Has not been cancelled

TV show description:
A procedural drama series, the Bosch: Legacy TV show is a sequel to the Bosch series which ran for seven seasons. Both shows are based on the novels of Michael Connelly.

The story follows former LAPD detective Harry Bosch (Welliver) as he begins a new chapter as a private investigator. He finds himself working with one time enemy and top-notch attorney Honey “Money” Chandler (Rogers). Their deep and colored history informs the show while they work together to do what they can agree on, finding justice.

Without the badge and a preference for old-school tactics, Bosch finds an invaluable resource in Maurice “Mo” Bassi (Chang), a tech-forward gadget whiz who shares Bosch’s commitment to justice and fondness for smooth jazz.

Meanwhile, Bosch’s daughter Maddie (Lintz) ventures into the world of the LAPD as a rookie patrol officer. She’s paired with Reina Vasquez (Sanchez), a no-nonsense, hard-charging training officer. As Maddie patrols the streets of Los Angeles, she grapples with what kind of cop she wants to be. Her father — who continues to live by the code that everybody counts, or nobody counts — believes the issue is clear: Being a cop is either a mission or just a job.

What do you think? Do you like the Bosch: Legacy TV show? Do you think it should be cancelled or renewed for another season?

This show is a smash. I can see 30 seasons of the team and story.

Hoping this will be a hit!