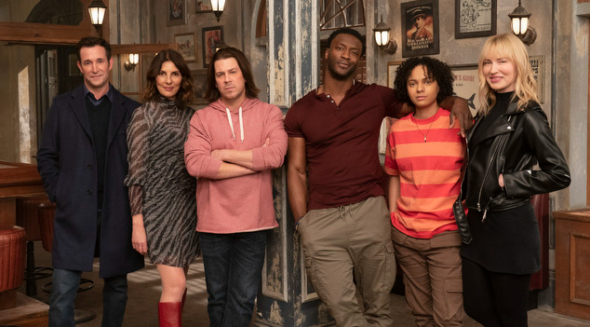 TV show description:
This is a revival of the Leverage TV show, an action series which ran for five seasons on TNT, from 2008 until 2012.

Since we last saw them, the Leverage crew has watched as the rich and powerful continued to take what they wanted without consequence. Accomplished British grifter Sophie Devereaux (Bellman), expert thief Parker (Riesgraf), hitter Eliot Spencer (Kane), and geeky computer hacker Alec Hardison (Hodge) have watched the world change over the last eight years. It’s become easier – and sometimes legal – for the rich to become richer and the powerful to squash anyone who gets in their way.

To address the changes in the world around them, the team finds new blood in Harry Wilson (Wylie) and Breanna Casey (Shannon). Wilson is a corporate lawyer who’s looking for redemption after realizing he’d been sitting on the wrong side of the table for his entire career. Casey is Hardison’s foster sister who has a knack for computers, robotics, and getting into trouble.

Together, this group of reformed pros puts their unique skills to good use by helping ordinary people fight back against corporate and governmental injustices.

What do you think? Do you like the Leverage: Redemption TV show? Do you think it should be cancelled or renewed for another season?

Please renewed another season leverage Remdemption revival so good on amazon prime video series look forward to seeing it every episode. Never missed any episode of it. Enjoy it and love it. Such a great show spy crime drama.

Agree with you love original series too need more season. I can’t wait to see it in fall season.

Great series I love original series with Timothy Hutton best actor in this show. Look forward every episode when it was on air never missed aired. Please renewed another season on amazon prime original series.