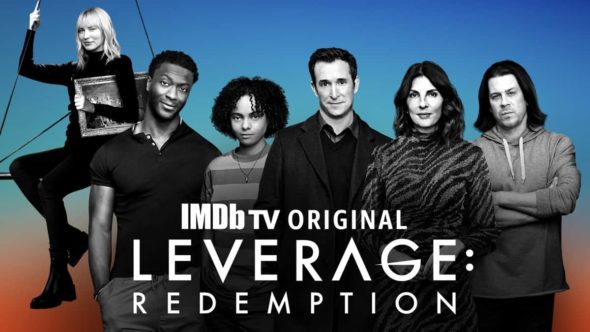 Can this crew still get the job done? Has the Leverage: Redemption TV show been cancelled or renewed for a second season on IMDb TV? The television vulture is watching all the latest cancellation and renewal news, so this page is the place to track the status of Leverage: Redemption, season two. Bookmark it, or subscribe for the latest updates. Remember, the television vulture is watching your shows. Are you?

Streaming on the IMDb TV platform, this comedy-drama action series is a continuation of the Leverage TV show (2008-15). The Leverage: Redemption series stars Gina Bellman, Aldis Hodge, Christian Kane, Beth Riesgraf, Noah Wyle, and Aleyse Shannon. Since we last saw them, accomplished British grifter Sophie Devereaux (Bellman), expert thief Parker (Riesgraf), hitter Eliot Spencer (Kane), and geeky computer hacker Alec Hardison (Hodge) have watched the world change. It’s become easier — and sometimes legal — for the rich to become richer and the powerful to squash anyone who gets in their way. To address the changes in the world around them, the team finds new blood with corporate lawyer Harry Wilson (Wylie) and Breanna Casey (Shannon), Hardison’s foster sister who has a knack for computers, robotics, and getting into trouble. Together, this group of reformed pros puts their unique skills to good use by helping ordinary people fight back against corporate and governmental injustices.

Unless they decide to publicize viewership, it is difficult to predict whether IMDb TV will cancel or renew Leverage: Redemption for season two. Sooner or later it comes down to production costs, versus viewership numbers. Given that this show is a continuation of the beloved TNT series, I think it will be popular enough to be renewed. I’ll keep my ears open and an eye out for news, and will update this page with breaking developments. Subscribe for free alerts on Leverage: Redemption cancellation or renewal news.

12/11/21 update: Leverage: Redemption has been renewed for a second season.

What do you think? Are you glad that the Leverage: Redemption TV show has been renewed for a second season? How would you feel if IMDb TV had cancelled this TV series, instead?

I love Leverage and am so glad it’s back! The addition of Noah Wyle is great. He is a wonderful actor. Hope the show is on for many more seasons.

Loved the tip of the hat to Noah and ER. Also the Librarians.

I can’t begin to tell you all how happy I am that LEVERAGE is back! I loved all of homages to the past LEVERAGE. Loved seeing Hurley again! I am hoping that somehow you all are able to bring back other characters like Maggie, Stirling, Tara Cole, and even Lt. Bonanno! Can’t wait to see what the 2nd season brings!

Very glad the show was renewed. Loved the original and sad it was canceled. I just saw the redemption show tonight and loved it. Glad to see the team was back. Sorry Timothy Hutton wasn’t but happy to see Noah Wiley and the new girl. She’s feisty and adds to the spice of the team and I’ve always loved Noah. I hope to see many more seasons!

Love the show! Hopefully there will more seasons!! Please

So good this season got revival so glad it’s back on there. Not same without Timothy Hutton. This new guy sucks sorry my opinion. Don’t think come back next season hopefully get renewed another season.