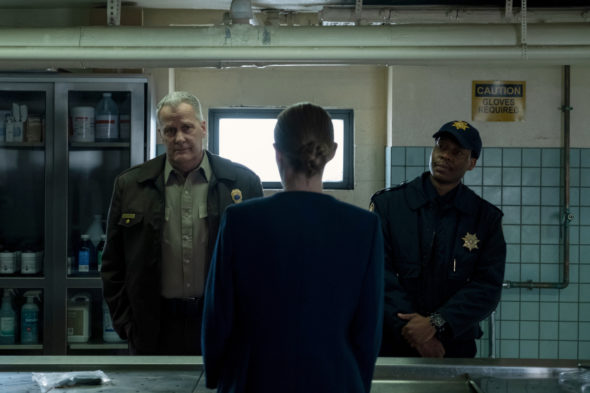 Will Harris do what’s right in the first season of the American Rust TV show on Showtime? As we all know, the Nielsen ratings typically play a big role in determining whether a TV show like American Rust is cancelled or renewed for season two. Unfortunately, most of us do not live in Nielsen households. Because many viewers feel frustrated when their viewing habits and opinions aren’t considered, we invite you to rate all of the first season episodes of American Rust here.  *Status Update Below.

A Showtime family drama series, the American Rust TV show is based on the novel by Philipp Meyer and stars Jeff Daniels, Maura Tierney, Bill Camp, David Alvarez, Alex Neustaedter, Julia Mayorga, Mark Pellegrino, and Rob Yang. A story of survival and transcendence, it’s told through the eyes of Del Harris (Daniels). He’s the complicated (and compromised) chief of police of a Pennsylvania Rust Belt town that’s full of good people making bad choices. When news of the murder of an ex-cop rips through the town, Harris must decide what lengths he is willing to take to protect Billy Poe (Neustaedter), the son of Grace (Tierney), the woman he loves.

What do you think? Which season one episodes of the American Rust TV series do you rate as wonderful, terrible, or somewhere between? Do you think that American Rust should be renewed for a second season on Showtime? Don’t forget to vote, and share your thoughts, below.

American Rust is brilliant and should continue as it’s left us on a cliff edge!

Should not be canceled

What is not to love about American Rust. From storyline to actors, this show is awesome. Please renew for many more seasons. It is pretty much true to life. Thanks

American Rust is a very well done series and definitely deserves a season 2 with more Billy and Issac!