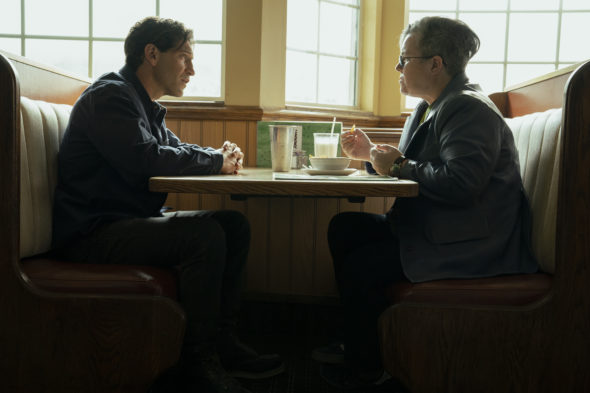 Life on the outside might not be much easier for Julian. Has the American Gigolo TV show been cancelled or renewed for a second season on Showtime? The television vulture is watching all the latest cancellation and renewal news, so this page is the place to track the status of American Gigolo, season two. Bookmark it, or subscribe for the latest updates. Remember, the television vulture is watching your shows. Are you?

Airing on the Showtime cable channel, the American Gigolo TV show stars Jon Bernthal, Gretchen Mol, Rosie O’Donnell, Lizzie Brocheré, Gabriel LaBelle, and Leland Orser. Guests include Wayne Brady, Alex Fernandez, Sandrine Holt, Yolonda Ross, and Melora Walters. Set in Los Angeles in the present day, the story follows Julian Kaye (Bernthal) 15 years after he was wrongfully arrested and convicted for murder. He’s now been released from prison and must navigate complicated relationships with his former lover Michelle (Mol), his troubled mother, and the people who betrayed him. While Julian struggles to reconcile the escort he was in the past and the man he is today, Detective Sunday (O’Donnell) seeks to uncover the truth about the murder that sent Julian to prison all those years ago. She unearths a much larger conspiracy along the way.

The first season of American Gigolo averages a 0.01 rating in the 18-49 demographic and 146,000 viewers in the live+same day ratings (including DVR playback through 3:00 AM). While these numbers don’t include further delayed or streaming viewing, they are a very good indicator of how a show is performing, especially when compared to others on the same channel. There can be other economic factors involved in a show’s fate, but typically the higher-rated series are renewed and the lower-rated ones are cancelled. Find out how American Gigolo stacks up against other Showtime TV shows.

Will Showtime cancel or renew American Gigolo for season two? The show is based on an established property and has a recognizable star, but the ratings seem to be quite low. I think there’s still a good chance that this drama will be renewed. I’ll update this page with breaking developments. Subscribe for free alerts on American Gigolo cancellation or renewal news.

What do you think? Do you hope that the American Gigolo TV show will be renewed for a second season? How would you feel if Showtime cancelled this TV series, instead?