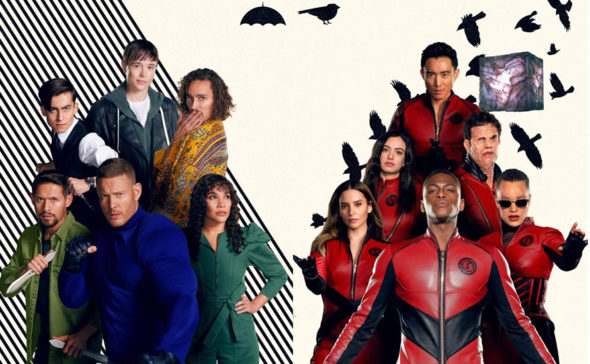 Have we seen the last of this group? Has The Umbrella Academy TV show been cancelled or renewed for a fourth season on Netflix? The television vulture is watching all the latest cancellation and renewal news, so this page is the place to track the status of The Umbrella Academy, season four. Bookmark it, or subscribe for the latest updates. Remember, the television vulture is watching your shows. Are you?

Streaming on the Netflix subscription service, The Umbrella Academy TV show stars Elliot Page, Tom Hopper, David Castañeda, Emmy Raver-Lampman, Robert Sheehan, Aidan Gallagher, Justin H. Min, Colm Feore, Ritu Arya, Justin Cornwell, Britne Oldford, Jake Epstein, Genesis Rodriguez, Cazzie David, Javon ‘Wanna’ Walton, and Jordan Claire Robbins. The story centers on an unusual group of people adopted by Sir Reginald Hargreeves (Feore) and trained to save the world at his school, The Umbrella Academy. All grown up, they reunite to solve the mystery behind Sir Reginald’s death and stave off a global apocalypse. In the third season, the Umbrella Academy returns home, convinced they prevented the initial apocalypse and fixed the timeline once and for all. But after a brief moment of celebration, they realize things aren’t how they left them. Enter the Sparrow Academy which immediately clashes with the Umbrellas in a violent face-off. Navigating challenges, losses, and surprises of their own, all the Umbrellas need to do now is to convince Dad’s new and possibly better family to help them put right what their arrival made wrong.

Unless they decide to publicize viewership, it is difficult to predict whether Netflix will cancel or renew The Umbrella Academy for season four. Since Netflix isn’t ad-supported, it can take a chance on series it believes in, but sooner or later it comes down to production costs, versus viewership numbers. Generally speaking, Netflix TV shows which are going to be renewed are usually picked up within a month or so of the series or season premiere. Umbrella Academy is one of the streaming service’s most well-known series so, given that Netflix is under particular pressure from investors to hold onto subscribers right now, I think the series will be renewed, possibly for a final season. I’ll keep my ears open and an eye out for news, and will update this page with breaking developments. Subscribe for free alerts on The Umbrella Academy cancellation or renewal news.

What do you think? Do you hope that The Umbrella Academy TV show will be renewed for a fourth season? How would you feel if Netflix cancelled this TV series, instead?