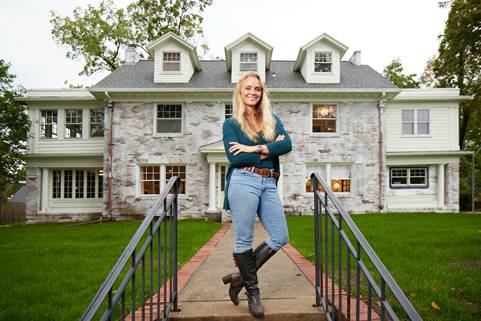 HGTV is headed back to Kansas City. The cable channel just announced the premiere date for season two of Bargain Mansions.

The home renovation series “follows Tamara, a busy mother of four, as she snags unbelievable deals on large downtrodden properties and puts her passion for restoration to work.”

Season two of Bargain Mansions debuts on HGTV on April 15th at 9 p.m. ET/PT. The season previously aired on DIY.

New York [March 25, 2019] Kansas City’s crumbling manors get massive makeovers from home renovator Tamara Day in the new season of HGTV’s Bargain Mansions. Premiering Monday, April 15, with back-to-back episodes at 9 and 9:30 p.m. ET/PT, the 14-episode season follows Tamara, a busy mother of four, as she snags unbelievable deals on large downtrodden properties and puts her passion for restoration to work. Throughout the season, Tamara preserves the historic charm and unique architectural features of each dwelling, such as antique light fixtures, clawfoot tubs and vintage doors with original hardware. She later incorporates modern layouts and luxurious amenities to attract top dollar from the right buyer.

“Kansas City is full of inexpensive big old mansions in a decrepit state that scare away most buyers, but these are the homes I want the most,” said Tamara. “With lots of time and TLC, I can turn the properties into spacious, stylish homes that are perfect for today’s families.”

The premiere episode finds Tamara at a massive 6,000-square-foot Colonial built in 1905. The once-stately home requires a major overhaul to bring it up to modern standards. Working alongside her father and mentor, Ward, she opens up the dining room area and designs the kitchen with custom cabinetry, striking pendant lights and a massive island that high-end buyers will love. Tamara also adds a large pantry with stunning glass shelving and a powder bathroom on the first floor.

To learn more about Bargain Mansions, visit www.hgtv.com/BargainMansions for photos and exclusive video from the show. Viewers also can interact via social media using #BargainMansions.”

What do you think? Have you seen Bargain Mansions? Will you watch the second season on HGTV?

I have been watching Bargain Mansions for years and love every episode. I used to watch it on DIY, then disappeared. I live in Toronto Canada and watch HGTV, but I have not seen Bargain Mansions. I would love to watch again. Help!!

Tamara and her Dad are wonderful in this superior Kansas City remodeling show. There are a number of enjoyable redo housing shows, but, Bargain Mansions is hands down the best!
Can’t wait to see the coming season!

I Love This Show!!!
Tamara Day is not afraid to get her hands dirty….and she drives a pickup truck!!
Lets keep it REAL!!

Love the show. Would like for it to come back for season 3

Love, love this show…her design is beautiful. I am using some of her ideas to decorate a spare bedroom.

Why are you advertising the shows as new when they are not?

I don’t like Tamara’s design choices. Color schemes, material chooses. The fireplace where she knocked off thetile and put more stone up 25 ft is too much of the same . Instead just change the type or color of tile along with. Stone.
She doesn’t add the wow factor to enough. Putting built in bunk beds, open shelving cluttered with dust gathering dishes or nicknacks. Brown brick inside contemporary homes.

What bothers me is the staged “accidents”, like the window falling in the “pain in the deck” episode. You can clearly see someone push the window out with a 2×4. The you witness her poor acting skills in her staged reaction. It’s insulting to the viewers. If you have to add that useless content to carry the show then perhaps you should find something more interesting. Show more of the actual work, instead of the planned accidents.

Why are these Bargain Mansions advertised as new episodes? I have seen them all before. Very disappointed about not seeing new episodes.

I LOVE this show and have watched it since the very beginning. It is fascinating because she renovates these beautiful old mansions, something that I don’t see on the other Reno shows that I watch (and I watch many and love many) but this is unique. Please never cancel❤️❤️❤️

Absolutely will watch, didn’t miss an episode since the beginning. I would have been so upset if Tamara Day and these beautiful mansions that are so unique from any other renovation shows would have been cancelled. LOVE HER SHOW❤️❤️❤️❤️