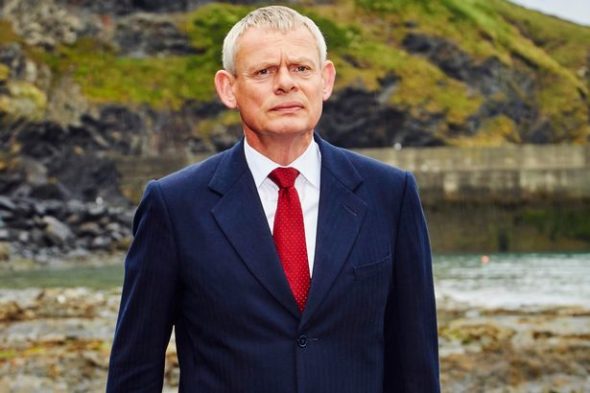 The UK dramedy, which airs on Acorn TV in the U.S., stars Martin Clunes as the only doctor in a small Cornish village. The cast also includes Caroline Catz, Ian McNeice, Joe Absolom, John Marquez, and Selina Cadell.

Earlier, star Martin Clunes was reported as saying season nine would be the last for Doc Martin, but ITV has not confirmed the news.

Production on season nine of Doc Martin begins this week. Neither ITV nor Acorn TV have announced a premiere date yet, but you can read more info below:

Doc Martin returns to Cornwall
Martin Clunes returns to Cornwall to play the nation’s favourite grumpy medic in a brand new series of Doc Martin for ITV.
Filming begins this week with Martin Clunes starring as Dr. Martin Ellingham, the GP with a brusque bedside manner and a phobia of blood, in eight new episodes of the hugely successful drama produced by Buffalo Pictures, and set in the idyllic hamlet of Portwenn in Cornwall.
Picturesque Port Isaac provides the beautiful backdrop for the popular series, with all regular members of the cast reprising their roles.
Caroline Catz plays Doc Martin’s wife, Louisa Ellingham, who has resigned from her job as headmistress at the local school to pursue a new career in child counselling.
Returning to this ninth series, Dame Eileen Atkins plays Doc Martin’s formidable Aunt Ruth. Ian McNeice is back to play Bert Large, with Joe Absolom as his son Al. John Marquez is PC Joe Penhale, Jessica Ransom is the doctor’s receptionist Morwenna Newcross and Selina Cadell is pharmacist Mrs Tishell.
Martin says:
“We love going to Cornwall to make Doc Martin, and we miss it when we are not there. The county is so beautiful, and the people have been so warm and welcoming to us.  It is the best job in television.”
In this new series the Doc’s career is hanging in the balance. His future as a GP is under scrutiny from the General Medical Council following complaints about his irascible approach to patients.
Doc Martin has been filming in picturesque Port Isaac, and the surrounding areas of the north coast of Cornwall since 2004. The huge popularity of the ITV drama has brought thousands more tourists to the pretty hamlet. This boost to tourism was recognised by Cornwall Tourism which presented a special award  for outstanding contribution to tourism to the Doc Martin team at a grand ceremony held at Truro Cathedral.
Producer Philippa Braithwaite says the Doc Martin team was delighted to receive such a prestigious award.
“The people of Cornwall, and Port Isaac in particular, have always been so helpful to us when we are making Doc Martin. We are thrilled that we have been able to give something back, and to be recognised in this way is the icing on the cake.
“We also contribute to a fund for the village and have raised £134,000 so far. The people of Port Isaac decide how the funds should be used.”
The funding has helped to support the Port Isaac Village School and it’s nursery, with transport for swimming and after school clubs. It has supported the Village Hall, provided disabled access to the hall, and helped to arrange transport for outings, speakers and meals for local pensioners. Funds have also been used for the Christmas lights in Port Isaac, and to set up an arts group.
Head of Visit Cornwall, Malcolm Bell, said, as he presented the outstanding contribution award to Mark Crowdy, Doc Martin’s Executive Producer:
“The Doc Martin team has projected the beauty and unique quality of Cornwall in the UK and around the world.  At trade events in the overseas markets they are frequently mentioned, and resulted in generating interest in and considerable visits to Cornwall.
“Their output showcases our stunning coast and Cornwall. In our research our visitors cited it influenced around 10% of our visitors to return or visit for the first time.”
The first seven series of Doc Martin have been produced locally in seven territories: UK, Germany, France, Greece, Netherlands, Czech Republic/Slovakia and Spain and sold in 138 countries.
The directors of this ninth series of Doc Martin are Nigel Cole and Charlie Palmer.”

What do you think? Are you a fan of Doc Martin? Are you excited for the upcoming season?

Yes. I am a long time fan. Please put the show back on BBC! You left a big hole….in broadcast!

Thanks for giving my family a TV series that we love. We look forward in seeing season 9 and hope it will continue for years to come!

My entire family laughs, and cringes together as we love Doc Martin and all of the actors in this series. We cannot wait until season 9 begins and will truly hate seeing it come to an end. Thanks for a wonderful time watching a TV series that is Great!

My husband and myself never miss an episode of your brilliant series, Doc Martin. The acting is so real and the British have a way of making comedy wholesome and free of embarrassment. We will be awaiting Series Nine in the autumn of 2019.

My husband and I love Doc Martin and all the wonderful characters on the show. We hope it continues for a long time. We are currently watching reruns and still giggle and can’t wait for a new season. Another viewer said “It’s like a Christmas gift” and it truly is. We plan NOTHING on the night the show is on. Wouldn’t miss it! Thank you!!

I am thrilled beyond words about the return of the show. I have never been so drawn to any show as I am “Doc Martin”.
Mr. Clunes is an outstanding actor…we are treated to such wonderful stories that are so well written and portrayed by not only Mr. Clunes but all the actors and actresses sharing their acting talents.
Each episode is like a Christmas present..the anticipation..the discovery…..
and the pleasure of being on the receiving end.

Not only is this a good series, with incredible story line and colorful characters, it is a virtual escape for me to the beautiful city of Cornwall. If it were possible, I would be moving there. Thank you for extending my vacation!

My husband and I love Doc Martin, so funny and interesting characters! Best show ever!!!

Love this series and its quirky characters!

We are very excited to hear there will be another season. This is our favorite TV show. I agree with Babi I wish more British shows were produced. We enjoyed As Time Goes By. Watching the reruns would be great too.

Huge fan! Wish I could visit!

I’m very excited that Doc Martin is coming back!! I wish they would consider more more British series!!

Netflix has lots of the British TV Series. Prime probably has them to.

I also love Acorn TV. I watch all their shows on my iPad for only $4.99 a month.