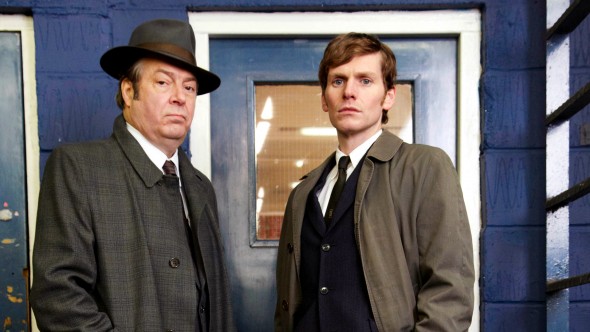 Endeavour is back on the case. Recently, ITV announced the TV show’s sixth season has begun filming.

Filming has just begun on season six of Endeavour, which “is set in 1969 and picks up with the team dispersed as they find their feet in their various new roles.” PBS has not yet announced if they’ll pick up the new season, though it’s likely.

London, 25 July 2018: Filming began this month on the sixth series of critically-acclaimed detective drama, Endeavour, with lead actor Shaun Evans confirmed to direct one of the new films. The star will also be sporting a new look as DS Endeavour Morse in the upcoming series, as seen in a first-look image released today.

Produced by leading drama indie Mammoth Screen in a co-production with Masterpiece, each story in the highly-anticipated sixth series will once again be written by series creator Russell Lewis who has penned each of the 23 screenplays to date.
Whilst reprising his titular role as Endeavour Morse, much-admired actor Shaun Evans will also be putting his directorial mark on the show, heading behind the camera for the second feature-length film in the series. The move follows his success directing two episodes of continuing drama Casualty earlier this year.
Evans’ character will similarly be trialling pastures new, with Morse having started a new role as a uniformed officer at the Woodstock police department and embracing the fashion of the period by growing a moustache.
Alongside Evans, the new series will see celebrated stage and screen actor Roger Allam return as DI Fred Thursday, alongside Anton Lesser as CS Reginald Bright, Sean Rigby as DS Jim Strange, James Bradshaw as Dr Max DeBryn, Sara Vickers as Joan Thursday, Abigail Thaw as Dorothea Frazil and Caroline O’Neill as Win Thursday.
Following the dissolution of Oxford City Police and the merging with Thames Valley Constabulary at the end of the last series, the latest instalment is set in 1969 and picks up with the team dispersed as they find their feet in their various new roles. However, despite their separation, the tragic murder of DC George Fancy still hangs over them both collectively and individually, with the case remaining unresolved.
With their new positions also come new colleagues and responsibilities. Thursday must adjust to working with new boss DI Ronnie Box played by Simon Harrison (Fearless) and junior DS Alan Jago played by Richard Riddell (Bodyguard). Meanwhile, Joan has settled back in Oxford and is training to work in social services under the mentor of new manager Viv Wall played by Alison Newman (EastEnders).
Creator, Russell Lewis says: “As our story reaches the last year of the 1960s, and mankind makes its giant leap, all at #TeamEndeavour look forward to exploring further early chapters in the casebook of Colin Dexter’s beloved creation.”
Other talent set to star in the upcoming series include Sophie Winkleman (Two and a Half Men), Blake Ritson (Indian Summers), Matthew Cottle (Unforgotten), Oliver Chris (Motherland), Sargon Yelda (Strike), Alice Orr-Ewing (A Very English Scandal) and Ross Boatman (Mum).
Receiving praise from critics and viewers alike, Endeavour has gone from strength to strength since its first outing as a one-off film in 2012 to mark the 25th anniversary of Inspector Morse on ITV. The fifth series launched with consolidated figures of 6.7m and 25% share, with the consolidated figures for the first four films the highest for three years. The series was also recently voted the fourth greatest British crime drama in a poll conducted by Radio Times.
Filmed in and around Oxford, the new films will be executive produced by Mammoth Screen’s Damien Timmer, alongside writer and creator Russell Lewis and WGBH’s Rebecca Eaton. Deanne Cunningham will produce the series whilst Johnny Kenton will direct Film 1and Shaun Evans will direct Film 2.”

What do you think? Are you a fan of Endeavour? Are you excited for the new season?

I came across Endeavour by happenstance the other night when a repeat of a second season episode was broadcast on the ABC (Australia). I found the dialogue witty, plot line clever, cinematography splendid—I loved it! I thought to myself how on earth did this show slip past my radar?!‍♂️ So since then I’ve tracked down all the episodes and have been watching ‘em to my heart’s content each night now so I can catch up with season 6. Not to mention I’ve been raving about it to others I can’t wait for Season 6!

We Love Morris & his father ! Please keep them coming !

Love the show!!! One of my favorites

Endeavour is one of the best of all time.

Endeavor is really one of the best shows on PBS. Why they would not pick it up is beyond me. It’s the 4th best crime drama series on TV.
My sustainer subscription would definitely stop, and I don’t think I am alone. Just a thought. We need intelligent shows to keep us sane during these troubled times.

Love ENDEAVOUR season 6, have watched it from the beginning on NET the Nebraska PBS station. Hoping PBS picks it up. This Sunday is the season finale. I actually watch it live and dvr it to watch it again. Love the facial hair.

I didn’t like the original show, but really like Endeavour. It is hard to tell if it will continue on PBS with the information posted above, because it evidently is on a different schedule in England ????

I miss John Thaw. He was the perfect Morse. Shaun Evans is good as Endeavour, but it’s just not the same.

Every season just gets better and better!

I absolutely agree! Season 6 was fantastic! We were stationed with the USAF in England right outside Oxford for 4 years and it takes me right back to that beautiful area.