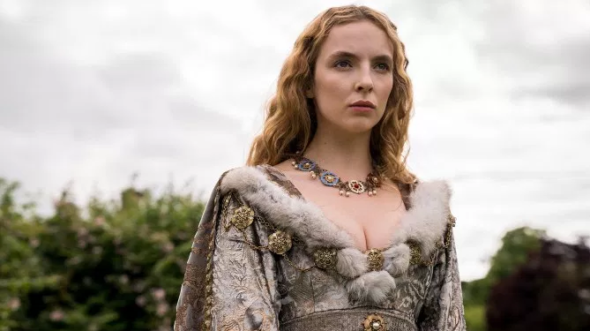 The White Princess is getting a sequel! Recently, Starz announced they’ve ordered a follow-up series called The Spanish Princess.

Based on the novels by Philippa Gregory, the historical drama will chronicle the early life of Catherine of Aragon, the first wife of England’s King Henry VIII.

Starz has not yet announced a premiere date for The Spanish Princess, but you can read more info below:

Beverly Hills, Calif. — Starz, a Lionsgate company (NYSE: LGF.A, LGF.B), announced today the network has greenlit “The Spanish Princess,” a new story in the dynastic saga of Tudor England and drawn from the global best sellers The Constant Princess and The King’s Curse by Philippa Gregory.
The STARZ Original Limited series “The Spanish Princess” continues the story from the Golden Globe® and Emmy® award-nominated STARZ Original Mini-series “The White Queen” and the STARZ Original Limited Series “The White Princess.” Produced by All3 Media’s New Pictures and Playground, “The Spanish Princess” is a powerful, epic story that not only returns the audience to the world of royal court intrigue as seen uniquely through the perspective of the women, but also sheds light on a previously untold corner of history – the lives of people of color, living and working in 16th century London.
“Starz is committed to its ongoing programming strategy to provide premium content highlighting the untold stories of strong women in history,” said Carmi Zlotnik, President of Programming for Starz. “We have a passionate fanbase who embraces female-led stories like ‘The White Queen’ and ‘The White Princess’ and are excited to continue with Catherine of Aragon’s story in ‘The Spanish Princess.’”
Acclaimed writers Emma Frost (“The White Queen,” “The White Princess,” “The Man in the High Castle”) and Matthew Graham (“Life on Mars,” “Electric Dreams,” “Dr. Who”) are serving as showrunners and executive producers.
Executive producing with Frost and Graham are Colin Callender (“The White Queen,” “The Dresser,” “Wolf Hall”) and Scott Huff (“Howards End,” “The White Princess,” “The Missing”) from Playground and Charlie Pattinson (“The White Queen,” “Requiem,” “The Missing 1 & 2”) and Charlie Hampton (“Shameless,” “Wild at Heart,” and “Inspector George Gently“) from All3 Media’s New Pictures.
Senior Vice President of Original Programming Karen Bailey is the Starz executive in charge of “The Spanish Princess.”
Starz retains all domestic multiplatform pay TV and SVOD rights to the series. Lionsgate retains all international and domestic distribution and home entertainment rights.
About “The Spanish Princess” Catherine of Aragon, is the beautiful teenaged princess of Spain who was promised the English throne since she was a child. She arrives in a grey, rain-lashed England with her glorious and diverse court including her lady-in-waiting Lina – an African Moor. She is Princess of Wales now, but when her husband Prince Arthur dies suddenly, the throne seems lost to Catherine. Until she claims her marriage was never consummated and that as a virgin she may set her sights on the new heir, the charismatic and headstrong Prince Harry who will one day rule as King Henry VIII.
“The Spanish Princess” is the third series drawn from Philippa Gregory’s best-selling novels. The first, critically-acclaimed STARZ Original Mini-series event “The White Queen,” was followed by the 8-episode limited series drama “The White Princess.”
“The White Queen” was the first STARZ Original series to attract more women than men viewers with women making up 55 percent of the viewership*. *“The White Queen” also consistently ranked in the Top 10 cable shows for each premiere night and averaged 4.8 million multiplatform viewers per episode in the United States. “The White Princess” also attracted 57 percent women viewership and averaged 3.8 million U.S. multiplatform viewers per episode.”

What do you think? Are you a fan of The White Queen and The White Princess? Will you watch The Spanish Princess?

Enjoyed the Spanish Princess very much. I’ll be looking up the sequels and binge watching during the Christmas break!

Loved both the white queen & The white princess would love sequels. Looking forward to the Spanish princess!

I benged on both the Queen and the Princess episodes. I’m hooked. I love the story line, and have become invested in the series. Pleeeaaasssee!!! Hurry up with the seuquels. Anticipating the Spanish Queen and then more successors. Thanks!

I really loved “The White Queen” and somewhat enjoyed “The White Princess”, I look forward to “The Spanish Princess”. I will plan to sign up for Starz when the shows debuts!

I diffently will be watching. I love the two white queen and princess so much, I bought the DVD of them. Can’t wait.

I might consider if this series is historically accurate. Unlike the Tudors years back who introduced characters that never lived or important events that never happened. Even Victoria on PBS is playing with history and changing the age, lifespan and/or romantic timings of characters.

CONNIE A. WETZEL
Reply to  Why Watch

This is true,but they have to fill in to make a story. Still loved it. Have to keep in mine it’s not all true.

Loved The White Princess! Looking forward to The Spanish Princess. Looking now for The White Queen to watch.

Here We Go. The Politically Correct Thing to do.

Please make a sequel or trilogy off The White Queen which ever way.
They were both very good I am a fan of both.