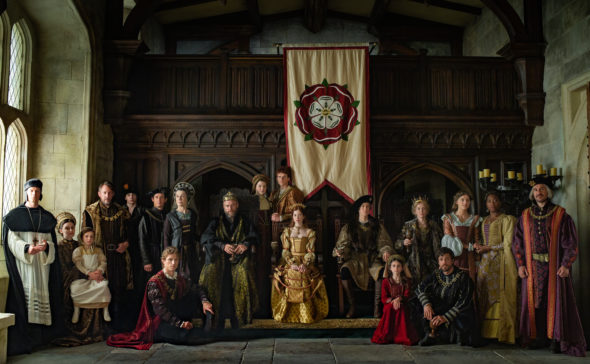 Is the first season of The Spanish Princess TV show on Starz a crowning achievement? As we all know, the Nielsen ratings typically play a big role in determining whether a TV show like The Spanish Princess is cancelled or renewed for season two. Unfortunately, most of us do not live in Nielsen households. Because many viewers feel frustration when their viewing habits and opinions aren’t considered, we’d like to offer you the chance to rate all of The Spanish Princess season one episodes here. *Status update below.

Based on The Constant Princess and The King’s Curse by Philippa Gregory, the series centers on Catherine of Aragon (Hope), the first wife of England’s King Henry VIII (O’Connor). Betrothed since childhood to England’s Prince Arthur (Imrie), Catherine has been raised to be the Queen of England. When Arthur dies shortly into their marriage, she must pull out all the stops to keep destiny within her grasp. Along with the help of her diverse court, she sets out to marry the new heir to the throne, Prince Harry.

*6/3/19 update: Starz has ordered a “second run” of episodes to wrap up The Spanish Princess series.

LOVED this show . Looked forward to it each week. Great lesson in history. PLEASE continue!

I’m sorry that I can’t like this. I am a Tudor history fanatic and read and watch everything I can. Been like this for over 40 years. I can’t get past all the untruths in this series. It is difficult to watch. I watched 2 episodes and no more. My biggest problem is the making Margaret Beaufort such a villian! She wasn’t. Prince Harry was 10 years old when Catherine arrived. History is interesting and doesn’t need this kind of show on the air.

I was so excited for The Spanish Princess after being obsessed with the superb White Queen/Princess! The acting is horrific, the accents unauthentic! The casting dept should be ashamed and dismissed!! A tragic waste for such History..

To each his own, but, I mingled with actors in my earlier life; saw many Shakespearean plays and still attend Ashland’s festivals annually. I am sorry that you don’t see the great acting and amazing details of this time period. I am from Spanish lineage, and not every Spanish person speaks with the proverbial lisp; although many do.

I was so excited to watch, after the spectacular White Queen/Princess! The acting is horrific, the accents unauthentic and laughable…the casting dept should be ashamed. Such an injustice to Philipa Gregory’s Wonderful Novel and History!

I’ve only seen one episode, but I enjoyed it very much. I am very familiar with this period of history, English and Spanish alike. It is great to see this portrayed without anything that stands out as glaringly incorrect or an anachronism. The costumes and settings are gorgeous and the actors seem well cast.