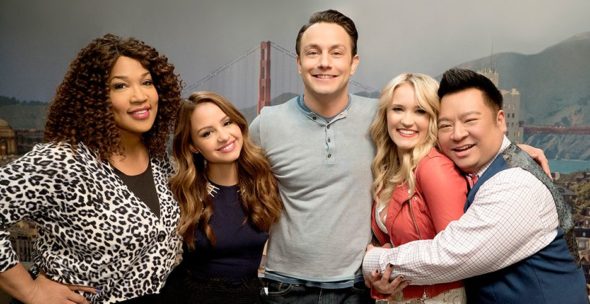 Although Freeform cancelled its Young & Hungry TV show last month, it’s not all over quite yet. The second half of the fifth and final season of Young & Hungry premieres on Wednesday, Jun 20, 2018 at 8:00pm ET/PT. In addition, the cable network has announced it is developing a Young & Hungry TV movie.

Learn more about the final season and the Young & Hungry movie from this Freeform press release.

The final season (5B) sees Gabi and Josh finally together and in love, but now navigating their new status as a full-fledged couple. Meanwhile, the rest of Josh’s staff, Yolanda and Elliot, are grappling with the change in work dynamic with Gabi as the “woman of the house.” Sofia, Gabi’s best friend, who begins to feel like a third wheel with the new couple, sets out on her own path to find love.

Additionally, Freeform has ordered into development a “Young & Hungry” movie, from the same series creative team including David Holden, Caryn Lucas, Ashley Tisdale, and Eric and Kim Tannenbaum, that will further the adventures of Gabi, Josh and their circle of friends.

“Young & Hungry” is produced by Holden, Lucas, Tisdale, Jessica Rhoades and Eric and Kim Tannenbaum in association with CBS Television Studios. Gabi Moskowitz, of BrokeAssGourmet.com, is a San Francisco-based food blogger and contributed to the development of this project. The series stars Emily Osment, Jonathan Sadowski, Aimee Carrero, Kym Whitley and Rex Lee.

What do you think? Are you a fan of Young & Hungry? Should Freeform have cancelled or renewed this TV series for a sixth season? Will you tune in for the movie? Let us know, below.

I agree with many other fans, I just finished watching the whole series on Netflix. There should be a proper ending to the story lines

I love this show! I watched it through every episode and was really disappointed in how the show ended! It felt very unfinished and I wanted more !!! Wish they would do the movie or something!

I wish you guys would keep airing the show, I love young and hungry, it’s my favorite show, I just got done binge watching it for the 10th time.

I just watch this show and very upset how it ended.

Absolutely should have had a finale that didn’t leave us all hangin with this proposal from Gabi – sucks!!

I discovered this show on Netflix. I can’t believe they ended it that way. The cable network should have thought more about the viewers that did like the show and ended it better.

What the frick!!!! Really ending it like that!!!! You have got to be fricking kidding me!!!! Atleast end it with an ending and not a contiuance???? Like she proposed and asked him to go to Seattle with her and y’all end the fricking show!!!!

Please at least give the show a proper ending! The cast and fans of the show deserve that much!! Such a great show!! Absolutely in love with it!!! ❤❤❤

Don’t think they should’ve cancelled show. I feel if they did a better job of advertising it, more people would’ve watched it. We just discovered on Netflix and know several groups of teens addicted to it. Perhaps making it a Netflix series would help reach more viewers.

I definitely feel u on that one. Netflix is definitely how I found out about it. I can’t believe that ended it the way they did.