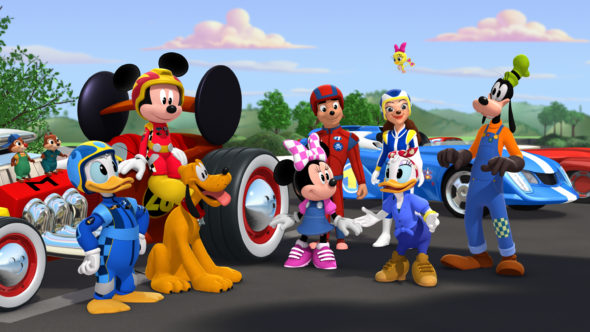 There’s always good news coming from the House of Mouse, and here’s some for your little ones. Disney Junior has renewed its animated Mickey and the Roadster Racers TV show for a third season, with a start date TBD. The early season three renewal comes just a month shy of the Mickey and the Roadster Racers season two premiere, on Friday, April 13, 2018 at 9:30am ET/PT.

DISNEY JUNIOR ORDERS THIRD SEASON OF THE ANIMATED HIT
‘MICKEY AND THE ROADSTER RACERS‘ AS IT REVS UP FOR ITS SEASON TWO PREMIERE, FRIDAY, APRIL 13, ON DISNEY CHANNEL

Disney Junior has ordered a third season of the animated “Mickey and the Roadster Racers,” Disney Channel’s #1 series among Kids 2-5. Production will continue as season two of the hit series – with a remarkable guest cast throughout – debuts FRIDAY, APRIL 13 (9:30 a.m., EDT/PDT) on Disney Channel.  New episodes will also be available on the DisneyNOW app and Disney Junior VOD that day.

Since its Jan. 2017 premiere, “Mickey and the Roadster Racers” has reached over 157 million viewers worldwide and is available in 158 countries in 32 languages. The series takes Mickey and the gang, along with their unique transforming vehicles, on humorous high-spirited races around the globe, as well as hometown capers in Hot Dog Hills. Off the racetrack, Minnie and Daisy also run their own successful business as Happy Helpers solving problems for anyone in need of a helping hand. The stories are designed to impart social and emotional lessons about friendship, teamwork, optimism and good sportsmanship.  Season two finds the gang enjoying upgrades to their personalized race cars, making them glow-in-the-dark and speedier.

“Mickey and the Roadster Racers” is featured in the “Disney Junior Dance Party On Tour” live concert experience, which launched March 14, and the popular “Disney Junior Dance Party!” attraction at Disney California Adventure. Additional brand extensions for the series include toys, storybooks, apparel, plush and home décor from Disney Consumer Products and Interactive Media, with new products debuting this fall. 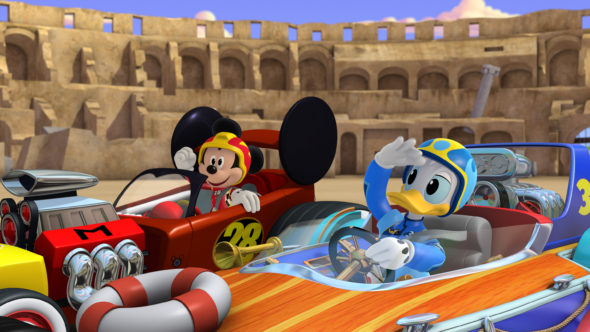 What do you think? Did your family enjoy the first season of the Mickey’s Roadster Racers TV show? Do you plan to tune in for seasons two and three on Disney Junior? Let us know, below.