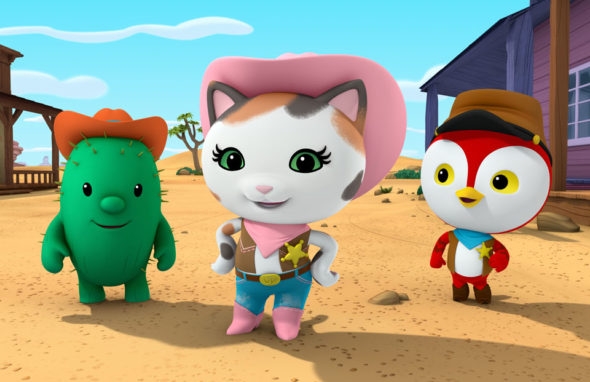 Sheriff Callie is hanging her hat up. In May, co-creator Holly Huckins confirmed the Disney Junior series has been cancelled after two seasons.

Huckins posted news of the cancellation on her Twitter in response to Mandy Moore’s new NBC series, This Is Us:

With "Callie" wrapping I was missing my favorite sheriff — but now I get to see her every week! #ThisIsUs https://t.co/JSKEgttR5z

Disney Junior has not officially confirmed the cancellation of Sheriff Callie’s Wild West yet.

What do you think? Do your kids watch Sheriff Callie? Are you sad the series is ending?

My one year old and 5 year old along with my husband and myself watch reruns of sheriff callie on hulu. The kids LOVE it. The theme song is what helps my youngest one get through check ups at the dr or a melt down. Her bedding is sheriff callie and we are trying to find toys, decor, and blankets with sheriff and the gang. Hate it ended!

Sometimes I think to my self and wonder, why should sheriff callie be cancled

Once I heard sheriff callie canceled I felt like my childhood is COMPLETELY over, does disney think about the consequences? What if they kid finds out and there childhood is ruined? Smh disney

Does disney think this is okay? Do they really want kids to feel sorrow and saddness for the show they love? I dont think this is okay, A Childs depression is serious the kid might feel sad for their show and start depression and commit to self harm lots of little boys and girls love this show. What did Sheriff Callie, deputy peck, tobias the cactus, and all the other characters ever do to disney? They are canceling the wrong show, You might not even read this comment halfway but if you read till the end reply to my comment.… Read more »

We miss the sheriff that taught us kindness, friendship, and how to be a great leader my Daughter Loves her dearly, I do to shes sad she won’t be able to see her favourite show every morning, every hour, she would watch it all day, we are big fans of Callie please dont cancel 🙁