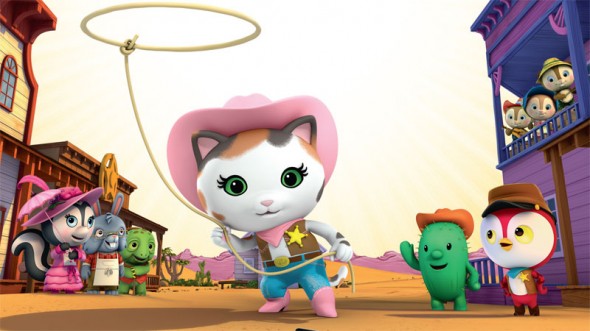 Disney Junior has ordered a second season of their animated series, Sheriff Callie’s Wild West. It stars the Mandy Moore as the voice of the title character.

Disney Junior has ordered a second season of “Sheriff Callie’s Wild West,” starring Mandy Moore (Disney’s “Tangled”) as the voice of Sheriff Callie. The action-packed Western series follows Callie, a Calico cat sheriff who keeps the peace in her frontier town of Nice and Friendly Corners by ensuring that everyone abides by the rules of good morals, manners and social ethics. The announcement was made today by Nancy Kanter, Executive Vice President, Original Programming and General Manager, Disney Junior Worldwide.

The first Western for preschoolers, “Sheriff Callie’s Wild West” charted new territory when it premiered on the WATCH Disney Junior app in November 2013. The first series across Disney|ABC Television Group to premiere multiple episodes online and on mobile devices before its television debut, it amassed over 23 million views. The series then launched on the 24-hour Disney Junior channel in January 2014 and year-to-date is the #1 series across preschool-dedicated TV networks in Kids 2-5. Additionally, its back-to-back premiere telecasts remain the network’s Top 2 telecasts of all time in Total Viewers.

The recently released “Sheriff Callie’s Tales of the Wild West,” a creative storytelling app that allows children to create their own stories starring Sheriff Callie and her friends from Nice and Friendly Corners, hit #1 in four countries and was in the top 10 overall titles in 47 countries.

Kanter said, “The rich characters and colorful Wild West backdrop combined with the universal messages of being kind to one another and recognizing right from wrong have whet kids and parents’ appetite to hear more Sheriff Callie stories. In season two, we will delve deeper into the folklore of the Old West to mine new adventures for Callie and her fellow townsfolk.”

Created by Denis Morella and George Evelyn and developed for television by Holly Huckins, the series is produced by Wild Canary in association with Disney Junior. Huckins serves as executive producer and story editor, Morella is director and Robert Ramirez is supervising director.

Disney Junior reflects the emotional connection generations of consumers have to Disney storytelling and Disney characters, both classic and contemporary. It invites mom and dad to join their child in the Disney experience of magical, musical and heartfelt stories and characters, while incorporating specific learning and development themes designed for kids age 2-7. Disney Junior’s series blend Disney’s unparalleled storytelling and characters kids love deeply with learning, including early math, language skills, healthy eating and lifestyles, and social skills. In the U.S., Disney Junior is a daily programming block on Disney Channel and a 24-hour channel. There are 34 Disney Junior channels in 25 languages around the world.

What do you think? Does someone in your house enjoy this Disney Junior animated series?

My granddaughter absolutely loves Sheriff Callie. She had just discovered horses , but she tries to lasso . We really love how the show teaches the right and wrong and how to love each other. Please keep them coming. Do you have the episodes for sale anywhere?