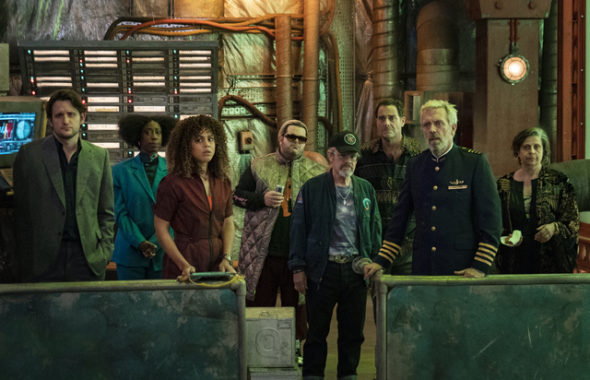 Next to the Titanic, this may be the worst cruise vacation ever.  Has the Avenue 5 TV show been cancelled or renewed for a third season on HBO? The television vulture is watching all the latest cancellation and renewal news, so this page is the place to track the status of Avenue 5, season three. Bookmark it, or subscribe for the latest updates. Remember, the television vulture is watching your shows. Are you?

A sci-fi comedy series airing on the HBO television network, the Avenue 5 TV show stars Hugh Laurie, Josh Gad, Zach Woods, Rebecca Front, Suzy Nakamura, Lenora Crichlow, Nikki Amuka-Bird, and Ethan Phillips. Guest stars in season two include Andy Buckley, Jessica St. Clair, Kyle Bornheimer, Adam Pålsson, Daisy May Cooper, Lucy Punch, Leila Farzad, Jonathan Aris, and Arsher Ali. While manning a luxury spacecraft owned by Herman Judd ( Gad), Captain Ryan Clark (Laurie) finds himself in over his head when the ship is thrown disastrously off-course. This turns what was meant to be an eight-week cruise into an eight-year journey. Picking up five months after failing to reroute the vessel, season two follows the crew — including fiery engineer Billie (Crichlow), unpredictable head of customer relations Matt (Woods), and faithful right-hand Iris (Nakamura) — as they struggle to lead, calm, control, and, if need be, hide from increasingly unruly passengers. On Earth, they’re lauded as heroes, and in space, everyone can hear them scream.

Will HBO cancel or renew Avenue 5 for season three? This show premiered in January 2020 and was renewed for a second season a month later. Thanks in part to the pandemic, it’s now been two and a half years between the end of season one and the launch of season two. Word is that the cast’s contracts expired in May of this year, so contracts would have to be renegotiated if there were to be a third season. The traditional ratings for the first season were quite low, and the second season’s numbers are also very low (so low we don’t have access to them). The show’s creator believes there’s a chance for a third-season renewal, but personally, I seriously doubt it. I’ll update this page with breaking developments. Subscribe for free alerts on Avenue 5 cancellation or renewal news.

What do you think? Do you hope that the Avenue 5 TV show will be renewed for a third season? How would you feel if HBO cancelled this TV series, instead?

I love this show. I have binged the entire thing so far, A LOT.

Cancelling it will be very disappointing:

PLEASE dont cancel Avenue 5!!! I absolutely love this show. It took a few episodes to really get going but I think its hilarious now. I would be so disappointed if it doesn’t come back for a third season, especially the way season 2 ended.