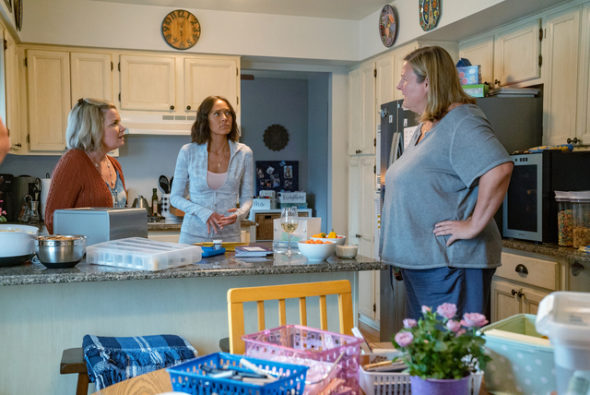 HBO is sticking with Sue. Somebody Somewhere has already been renewed for a second season on the cable channel. The show launched on January 16th and just three of the season’s seven episodes have aired thus far.

A comedy series, the Somebody Somewhere TV show stars Bridget Everett, Jeff Hiller, Mary Catherine Garrison, Danny McCarthy, and Mike Hagerty with Murray Hill, Jon Hudson Odom, Heidi Johanningmeier, and Jane Brody in recurring roles. The story follows Sam (Everett), a true Kansan who struggles to fit the hometown mold. Grappling with loss and acceptance, Sam’s saving grace is singing and it leads her on a journey to discover herself and a community of outsiders who don’t fit in but don’t give up. Other characters include her co-worker, Joel (Hiller); Sam’s resentful and scrappy sister, Tricia (Garrison); unremarkable brother-in-law, Rick (McCarthy); and stoic family patriarch Ed (Hagerty).

Airing on Sunday nights, the first season of Somebody Somewhere averages a 0.03 rating in the 18-49 demographic and 136,000 viewers in the live+same day ratings (including DVR playback through 3:00 AM). It’s one of HBO’s lower-rated shows in the traditional ratings.

HBO Renews Comedy Series SOMEBODY SOMEWHERE For A Second Season

· HBO announced today that the critically acclaimed comedy series SOMEBODY SOMEWHERE has been renewed for a second season.

· Logline: Starring and executive produced by comedian and singer Bridget Everett, the seven-episode first season debuted January 16, with new episodes airing weekly on HBO and HBO Max. The season one finale debuts on February 27. From Mighty Mint, Duplass Brothers Productions, and creators & executive producers Hannah Bos and Paul Thureen (writers on HBO’s “High Maintenance”), the series follows Sam (played by Everett), a true Kansan on the surface, but, beneath it all, struggling to fit the hometown mold. Grappling with loss and acceptance, singing is Sam’s saving grace and leads her on a journey to discover herself and a community of outsiders who don’t fit in but don’t give up, showing that finding your people, and finding your voice, is possible. Anywhere. Somewhere.

· The Hollywood Reporter hailed SOMEBODY SOMEWHERE as “quietly revelatory,” while IndieWire called it “a must-see heartfelt delight.” New York Times hailed Everett’s performance as “subtle and stunning,” with Vogue calling her “sensational.”

· Amy Gravitt, executive vice president, HBO Programming quote: “Bridget Everett brings such warmth to the screen, it’s been an absolute joy to see audiences share a sense of belonging with this ensemble. We’re delighted to have Hannah and Paul remind us all where we come from in another season of Somebody Somewhere.”

What do you think? Have you enjoyed watching the Somebody Somewhere TV series? Are you glad that this show’s been renewed for a second season on HBO?

I absolutely love this show. I was immediately drawn in after the first couple of minutes and set my DVR. Bridget Everett really knows how to captivate an audience. It is very relatable and just leaves one feeling good. I was so disappointed when there were only 7 episodes. I was worried it had been canceled. So happy it’s been renewed instead.

Am so glad it has been renewed. I love this show – it’s better than all the rest.

I really liked this show. I’m very happy there will be a season 2.

I have really enjoyed this show! I’m so very pleased to see that there will be more!

Been following Bridget Everett for a while. She’s quite funny. The entire cast is very good.

I love this show! It is heartwarming and fun.