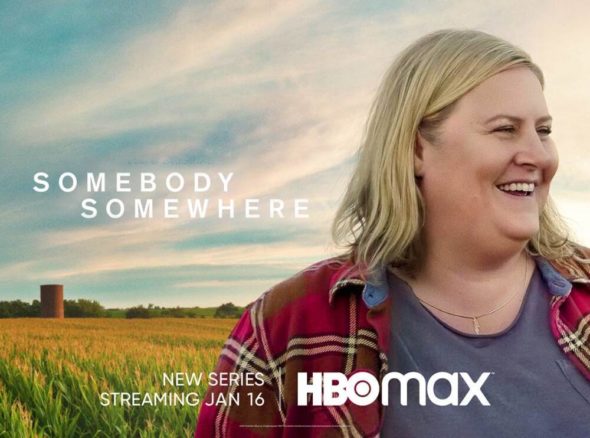 HBO has introduced Somebody Somewhere to its Sunday night schedule and, though its ratings are pretty low, the show has received numerous very positive reviews. Will this series attract enough viewers to stay on the air? Will Somebody Somewhere be cancelled or renewed for season two? Stay tuned.  *Status Update Below.

A dramedy series, the Somebody Somewhere TV show stars Bridget Everett, Jeff Hiller, Mary Catherine Garrison, Danny McCarthy, and Mike Hagerty with Murray Hill, Jon Hudson Odom, Heidi Johanningmeier, and Jane Brody in recurring roles. The story follows Sam (Everett), a true Kansan who struggles to fit the hometown mold. Grappling with loss and acceptance, Sam’s saving grace is singing and it leads her on a journey to discover herself and a community of outsiders who don’t fit in but don’t give up. Other characters include her co-worker, Joel (Hiller); Sam’s resentful and scrappy sister, Tricia (Garrison); unremarkable brother-in-law, Rick (McCarthy); and stoic family patriarch Ed (Hagerty).

What do you think? Do you like the Somebody Somewhere TV series on HBO? Should it be cancelled or renewed for a second season?

*2/3/22 update: Somebody Somewhere has been renewed for a second season on HBO.

This is a good show. Heartfelt and I think it has some real good, strong actors. I hope it’s around for a few seasons at least.