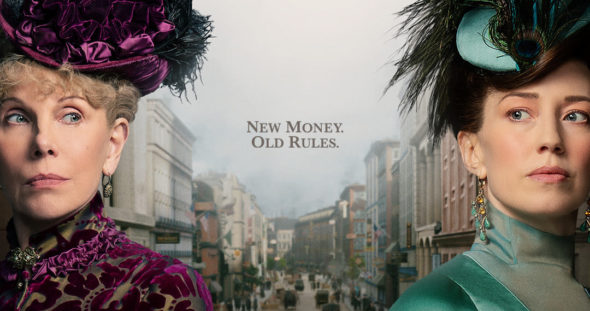 Julian Fellowes found great success when he created the Downton Abbey TV series in the UK. His newest drama series, The Gilded Age, has been in the works for many years and has finally surfaced at HBO. Will it be a hit for the cable channel? Will The Gilded Age be cancelled or renewed for season two? Stay tuned.  *Status Update Below.

What do you think? Do you like The Gilded Age TV series on HBO? Should it be cancelled or renewed for a second season?

Fabulous show. Why the poor ratings. Knew little about this time in history. Had everything in it I love. Scandals, snobbishness, discrimination, racism, love and other intriguing subjects. Definitely a favourite of mine

Best time period drama on HBO ever so good look forward to seeing it every Monday night.

The subject matter captures an enduring theme during a transformational part of American history. Casting and scripting are excellent. The interplay of individual dreams and social norms in an emerging meritocracy is a joy to witness.

Excellent I am guy love this show look forward to seeing it rest of the season. I am hooked on this show I wish streaming it.